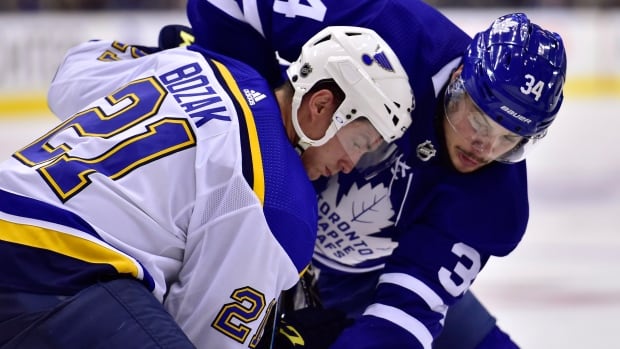 Jake Allen made 22 saves, Ryan O’Reilly scored his first goal with St. Louis, and the Blues beat the Toronto Maple Leafs 4-1 on Saturday.

Robert Bortuzzo, Zach Sanford and Ivan Barbashev, into an empty net, had the other goals for St. Louis (2-3-2), which picked up just its second victory of 2018-19. David Perron added two assists.

Toronto buried an NHL-high 33 goals in seven games to open the schedule but, after getting shut out 3-0 by the Pittsburgh Penguins on Thursday and again through two periods Saturday, went 116 minutes 37 seconds without a goal until Rielly cut the Blues’ lead to 3-1 early in the third.

The game marked the return to Toronto of Blues centre Tyler Bozak, who left for St. Louis in free agency this summer after nine seasons with the Leafs. Bozak was honoured during the game’s first television timeout with a video montage from the 32-year-old’s time in Toronto.

The Blues — who entered with just one win in their first six games on the heels of a roster overhaul that saw Bozak, O’Reilly, Perron and Pat Maroon brought in over the summer — came in convinced they were close to putting things together despite their shaky early record.

Scoreless after the first, the visitors went ahead at 4:45 of the second when Bortuzzo’s point shot went off the stick of Toronto defenceman Travis Dermott and bounced past Andersen for the blue-liner’s first of the campaign.

Andersen made a nice stop on Brayden Schenn later in the period, but could do nothing on Sanford’s shot upstairs at 13:05 that made it 2-0 after the Leafs couldn’t get the puck out of their end.

O’Reilly then scored his first for St. Louis since coming over in a blockbuster trade with the Buffalo Sabres on July 1 at 16:37 when he was left all alone in front to take a pass from Vladimir Tarasenko and beat Andersen as a Leafs penalty expired.

Dermott and Rielly were both caught below Toronto’s goal line on the play, while Connor Brown was puck watching instead of looking over his shoulder.

Some boos could be heard from the Scotiabank Arena crowd as the teams headed to the locker-rooms.

The Leafs, who had just eight shots through 40 minutes to the Blues’ 13, had 1:32 of power-play time to start the third, but Nazem Kadri’s shot in tight hit Allen and then the post.

Rielly, who came in leading NHL defencemen in scoring with 10 points, gave Toronto hope at 4:22 of the third when his shot from the slot squeezed through Allen four his fourth.

The Leafs’ top-ranked power play went to work again with 7:10 left in regulation, but Allen stopped Patrick Marleau on the doorstep before Toronto’s Andreas Johnsson went off for holding the stick with seven seconds left in the man advantage.

The Leafs pulled Andersen with just over three minutes remaining, and a Jaden Schwartz penalty made for a 6-on-4 advantage, but Allen and the Blues hung tough before Barbashev scored into an empty net with 1:43 remaining on the clock as Toronto fell to 2-3-0 at home.

St. Louis had the best chance to open the scoring in the first on the power play, but Tarasenko rang a shot off the post with Andersen at his mercy. The Toronto goalie the then shut the door at the side of the net on Schwartz moments later.

Alexander Steen forced a good pad save out of Andersen earlier in the period on a 2-on-1 rush after a bad pinch from Rielly at the Leafs blue line, while Allen was equal to Josh Leivo’s shot on a partial break at the other end.