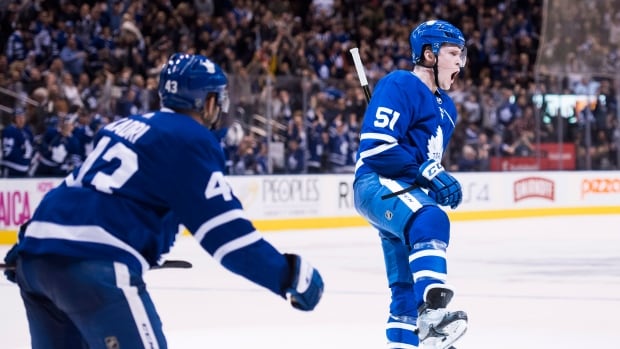 Kasperi Kapanen scored the winner with 2:45 left in regulation after Jake Gardiner tied it 26 seconds earlier as the Toronto Maple Leafs overcame the loss of star centre Auston Matthews to beat the Winnipeg Jets 3-2 on Saturday night.

Matthews left the game in the second period with a shoulder injury and did not return.

Nazem Kadri had the other goal for Toronto (8-3-0), which got 22 stops from Frederik Andersen. Mitch Marner added two assists, reaching 100 in his NHL career, as the Leafs snapped a three-game losing streak at home.

Toronto beat the Jets 4-2 on Wednesday at Bell MTS Place to snap a two-game slide. Winnipeg was playing its third game in four nights following Friday’s 2-1 road victory over the Detroit Red Wings.

The Jets, who were playing for the eighth time in two weeks, were scheduled to leave immediately after the game for Finland, where they will battle the Florida Panthers in Helsinki on Thursday and Friday.

Down 2-0 through two periods, Kadri got Toronto within one at 6:33 of the third off a nice feed from Marner for his second goal of the season and second in as many games after going nine straight without one to open the schedule.

With Matthews out of action, Kadri was reunited with Marner and Patrick Marleau, his linemates from last season.

Toronto went on the power play not long after getting on the board, but Hellebuyck was there to stop Kadri’s redirection in the slot.

But the Winnipeg goalie could do nothing on the equalizer as Gardiner, who scored his first goal of the season in the 500th game of his career, with 3:11 left to play before Kapanen roofed the winner on the very next shift.

Toronto lost Matthews 90 seconds into the period after Jets defenceman Jacob Trouba delivered a clean shoulder-to-shoulder check at the side of the Winnipeg net.

Watch the play that forced Matthews out

Matthews, who came into the game tied for third in NHL scoring with 16 points (10 goals, six assists) despite failing to find the scoresheet in the last three games, immediately skated to the bench favouring his left side before heading straight to the locker-room. The 21-year-old missed 20 games last season due to injury, including a month on the shelf because of a right shoulder problem.

If Matthews is out for any length of time, it would mean the Leafs are without two-thirds of the line of Marleau-Matthews-William Nylander, a restricted free agent still mired in a contract impasse, that head coach Mike Babcock envisioned this summer following the addition of John Tavares.

In the second period, the Leafs paid tribute to Stompin’ Tom Connors and his Hockey Song, with Tim Hicks performing the iconic song for the Scotiabank Arena crowd.

The legendary tune was recently inducted into the Canadian Songwriters Hall of Fame 1:14