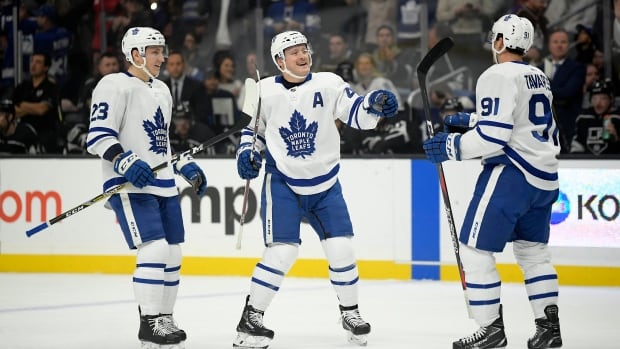 Nazem Kadri scored two power-play goals and John Tavares had a goal and two assists in the Toronto Maple Leafs’ 5-1 victory over the Los Angeles Kings on Tuesday night.

Morgan Rielly and Andreas Johnsson also scored in Toronto’s fourth win in five games overall and its seventh win in eight road games this season. Frederik Andersen made 22 saves as the powerful Leafs swept their two-game season series with NHL-worst Los Angeles by a combined 9-2.

The Kings are down to their top two AHL goalies after Jack Campbell joined Jonathan Quick on injured reserve this week with torn meniscuses in their knees. Even their normally sturdy penalty-killing units struggled against Toronto, giving up multiple power-play goals for only the second time this season.

Toronto opened a three-game California road swing with another dominant performance, leading 2-0 just 6:12 in and getting 11 shots on net before Los Angeles got its first. The Maple Leafs scored three power-play goals and continued their impressive early-season effort despite the continued absence of holdout William Nylander and star Auston Matthews, who missed his seventh straight game with a shoulder injury.

Tavares scored a goal in his third consecutive game, connecting on the power play in the first period for his 11th goal of the season. The star forward already has 22 points in 18 games during his debut season with his hometown team.

Kempe ended his 12-game goalless streak with a first-period deflection, but Rielly put Toronto up 3-1 early in the second after two Leafs converged on Kings defenceman Drew Doughty and forced a turnover.

Johnsson then scored after four Kings stood and watched while Travis Dermott skated the puck from the point to the net for a pass.

Kadri connected again late in the second period for his fourth goal in four games and his seventh in nine games.