A day after general manager Kyle Dubas told TSN’s Bob McKenzie that the Leafs would enter 2018-19 without a captain — a position that’s remained vacant for 2 1/2 years — Rielly said continued discourse about the ‘C’ and whose jersey it will eventually be stitched on simply comes with the territory when playing in a media fishbowl.

“We certainly don’t talk about it as a group,” the 24-year-old told reporters Thursday after an informal skate with teammates at Toronto’s practice facility. “You guys have a job to do and that’s fine. We understand that. It’s part of it.”

“I don’t think we’ve ever had a conversation amongst ourselves about it,” Leafs winger Zach Hyman added. “It’s all the buzz outside: Who’s going to be captain? But in the dressing room, nobody talks about who’s the captain or who’s the assistant captain.”

Toronto has been minus a captain since Dion Phaneuf was traded to the Ottawa Senators in February 2016 with the Leafs’ talent-deprived roster well on its way to bottoming out in the standings.

However, much has changed since with the drafting of a phenom in Auston Matthews to lead a young and dynamic forward group, back-to-back-playoff appearances, and the earth-moving addition of star centre John Tavares in free agency this summer.

Tavares, who wore the ‘C’ with the New York Islanders for five seasons before bolting to his hometown on July 1, and Matthews are thought to be the most likely candidates for captain, but Rielly said the team has succeeded without a single, defined leader the last two years because of its character up and down the lineup.

“It’s not just going to be one person that’s going to have to take all the pressure,” said Rielly, himself another player often mentioned in captaincy discussions as he enters his sixth NHL season. “We feel comfortable with the group we have, we feel comfortable with where we’re at in terms of personnel, especially when it comes to that leadership area.” 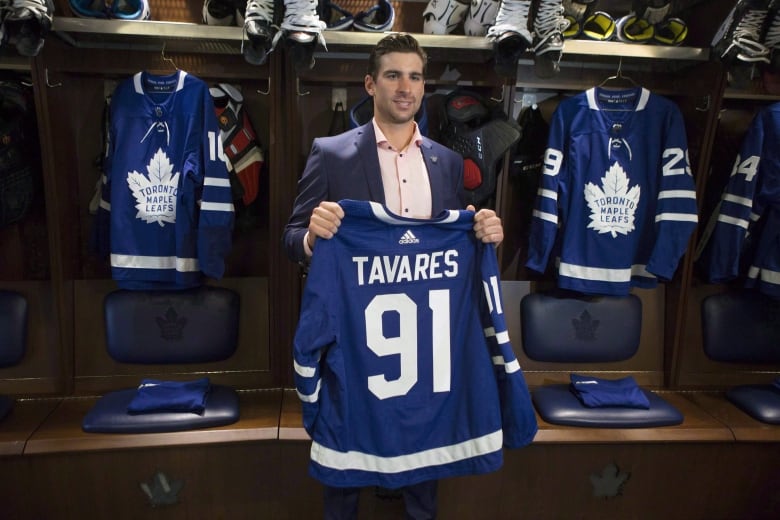 John Tavares, fresh off signing a seven-year deal with the Leafs, was captain of the New York Islanders. (Chris Young/Canadian Press)

An assistant captain with Toronto the last few years — along with the since-departed Tyler Bozak and Leo Komarov — the Vancouver-born Rielly added it’s always an honour wearing a letter on his left shoulder.

“It’s obviously a cool feeling,” he said. “But it really doesn’t change anything about the person that has it. You just go about your business the same way.”

Rielly and Hyman are among a number of Leafs that have been skating on their own the last few weeks in preparation for the start of training camp on Sept. 13.

Matthews and Tavares were both in Chicago for the NHL’s annual media tour event, but were on the ice earlier this week.

While the summer sessions are informal, this one included a number of interested spectators, with Dubas, head Toronto head coach Mike Babcock and team president Brendan Shanahan perched along a railing overlooking the drills and scrimmages.

While not permitted on the ice until camp officially begins, Rielly said it’s clear Babcock would like to be out there with his players now as Toronto looks to build on those consecutive playoff appearances with the franchise’s first series win since 2004.

“He definitely wants to,” joked Rielly, who is coming off a career-high 52-point campaign. “I think that’s why the rule is in place. Thankfully that has been established. I think it’s good. The coaching staff’s around. They’re talking to guys, they’re making sure everybody feels welcome. We’ve got a good environment going.

“As camp approaches we’re just going to keep amping up.”

One player absent from the skates is Toronto winger William Nylander, a restricted free agent still without a new contract with camp just a week away.

Nylander has said he’d like to get a long-term agreement with the Leafs, but a shorter so-called “bridge deal” is also a possibility.

“We all want Willie (here),” Rielly said. “He’s been a good teammate. He wants to be here, too, but that’s not in our hands. We’re just going to try to get ready for camp the best we can. We want him there, but if not we’ll continue without him.”

The same way they will, at least for now, continue without a captain.