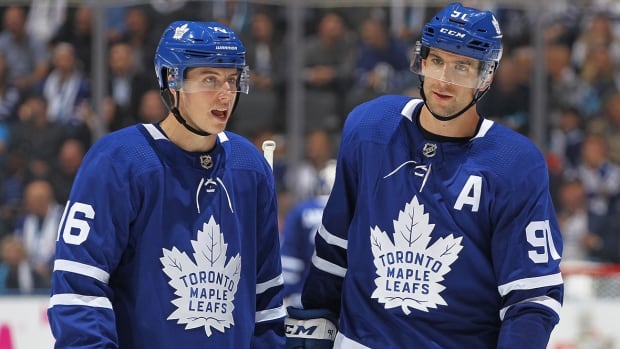 Mike Babcock should have the Toronto Maple Leafs’ full attention when they return to practice Friday.

Pegged as a legitimate Stanley Cup contender after a hype-filled summer and exhibition schedule, Toronto defeated the Montreal Canadiens 3-2 in overtime to open the NHL regular season.

But the Leafs were far from convincing Wednesday against a team with a fraction of the expectations or star power. They were unsure at times of their positioning, slow to move the puck, and sloppy or tentative when it did make it on their sticks.

Montreal’s largely no-name roster hemmed the hosts in their own zone for long stretches, and if not for Toronto goalie Frederick Andersen’s stellar performance — 15 of his 34 saves came in a third period where the ice was tilted heavily in the Canadiens’ favour — the Leafs could very well have left Scotiabank Arena empty handed.

Sure, there were also moments of brilliance at the other end. Toronto star Auston Matthews scored on two electric shots, including the winner, John Tavares buried his first goal in blue and white after signing a big-money deal with Toronto in free agency, and Montreal goalie Carey Price was forced to make a few jaw-dropping stops.

While happy with the win, it’s clear the Leafs have plenty of work to do.

“[The media] can write all you want and tell everyone how great we are, but it’s the National Hockey League and you’ve got to come to work every day,” Babcock said following the victory. “If you don’t work harder than the other team, if you don’t put your work before your talent, you don’t win. If you turn the puck over, you don’t win.

The Canadiens were also clearly the better team at 5-on-5, holding a 63-47 edge in pucks directed at Andersen.

“It’s not going to be perfect, especially early on,” said Leafs forward Nazem Kadri, who had two assists. “As the games roll on you’re going to see things tighten up.

“That’s what [looking at] the film’s for and we just keep progressing.”

Watch highlights of the Leafs’ OT win over Montreal:

Babcock praised the play of defenceman Travis Dermott, but it’s usually a problem when a rookie in the bottom pair has the blue line’s best night.

The top duo of Morgan Rielly and 37-year-old Ron Hainsey struggled, with the latter getting exposed more than a few times by Montreal’s speed.

“We just have to be a little bit more sure of ourselves and play a bit of a quicker game. We’re a pretty good team when we have the puck. Just do a better job of taking care of it and playing in their zone.”

That will no doubt be one of Babcock’s messages ahead of Saturday’s visit by the Ottawa Senators, a team with even lower expectations than Montreal this season.

“Part of it is execution, part of it is work,” Babcock said. “We’re way better than that and expect more.”

Toronto has made the playoffs the last two springs — losing to Washington in six games and Boston in seven — with a young, talented roster after the bumbling franchise missed out 10 of the previous 11 seasons.

But with the addition of Tavares, oddsmakers placed the Leafs at the front of the line to hoist the Cup and end a 51-year title drought.

Babcock is hoping the sub-par performance against Montreal will serve as an early wake-up call.

“You think there’s a big carry over from year to year and there’s not,” said the coach. “You start over again each and every year. This is a different kind of team with a different set of expectations.

Notes: Matthews responded post-game to a question about Leafs president Brendan Shanahan’s assertion earlier in the day that Toronto’s young stars will have to make financial sacrifices to keep the group together. The team currently is at a contract impasse with restricted free agent William Nylander, who is back home in Sweden waiting for a deal to get done. “That’s why we’ve got agents, right?” said Matthews, who along with Mitch Marner can also become an restricted free agent next summer. “We’ll stay out of it and just play hockey.” … After hosting Ottawa, Toronto hits the road for its next four against Chicago, Dallas, Detroit and Washington.