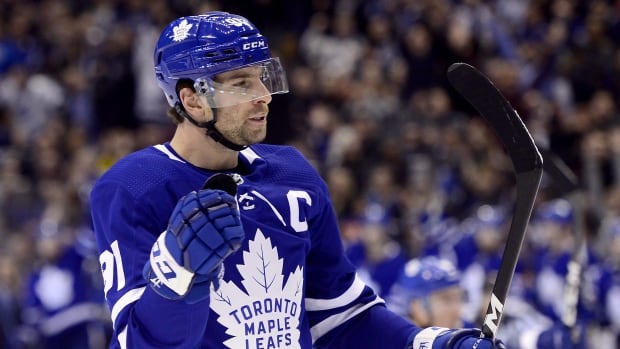 Walking into the Maple Leafs’ practice facility represented a small return to normalcy for John Tavares.

Toronto’s captain also got an immediate glimpse of how different life looks as the NHL moves forward in hopes of completing its pandemic-hit season.

Testing, hygiene, masks when not exercising and observing physical distancing rules are all part of a new normal as the league enters Phase 2 of its return-to-play protocol — the second of four steps with an eye towards resuming play this summer.

But Tavares quickly realized the time constraints of having roughly 45 minutes for off-ice workouts and 40 minutes of skating for these voluntary sessions with a small groups of teammates.

“The intensity is there. There’s a ton of benefit, there’s no doubt,” he said on a video conference call with reporters Tuesday. “But to just give you an example, after [Monday] I brought my sticks home so I could tape them up [and] save time at the rink. And even for guys to get some manual therapy after developing some soreness on the ice, the windows are fairly small.

“But overall, the actual work we were able to get in and being out on the ice and in the gym is going to go a long way in helping us prepare and get ready.”

WATCH | Should a resumed NHL season count like any other?:

Tavares skated with Ilya Mikheyev, Jake Muzzin and Jack Campbell on Monday and Tuesday, with Cody Ceci and Mitch Marner expected to join later this week to complete their six-man group.

Six other Leafs — Zach Hyman, Alexander Kerfoot, William Nylander, Morgan Rielly, Travis Dermott and minor-league goalie Joseph Woll — make up the other group confirmed to have hit the ice for the sessions that are closed to the media.

“There’s a lot of excitement from the guys to get back in a little bit of what we’re used to,” Tavares said. “Going back to the rink, seeing each other.

“Even with things being different, it’s been such a breath of fresh air.”

What’s also going to be different is the 24-team format should the league get the green light from health and government officials to complete the 2019-20 campaign in two centralized hub cities this summer. If all goes well, the league aims to hold training camps sometime after July 10 before resuming the season later that month or in early August after the schedule was originally paused nearly three months ago because of the COVID-19 pandemic.

So with all that in mind, will teams get a free pass if things don’t go according to plan in these extraordinary times?

“We’re still competing for the Stanley Cup, and to win it is obviously going to be extremely difficult,” Tavares said. “The urgency from our group … is extremely high.”

The Leafs sat third in the Atlantic Division at the time the NHL paused its schedule, but will now have to beat the Columbus Blue Jackets in the best-of-five qualifying round just to make the playoffs before potentially having to navigate four best-of-seven series.

“This is an opportunity to win the Stanley Cup,” Tavares added. “Don’t take any of those chances or those opportunities for granted.”

A member of the NHL/NHLPA Return to Play Committee that hammered out details for the 24-team plan, the 29-year-old said it makes sense for Phase 2 to eventually be expanded so that groups of more than six will be allowed in the building at one time.

But all players in their current groups must stick together — no subbing in and out — meaning there’s a decent chance the Leafs see a line of Tavares, Mikheyev and Marner as a potential fit if the games resume. Coaches and management, it should be noted, are only allowed to observe Phase 2 workouts from afar.

“This is the way we’re starting,” said Tavares, who had 26 goals and 60 points in 63 games this season. “We can use this time to get better, get familiar with each other again, and build some positivity and continuity.

“We want to be firing on all cylinders as best we can be once competition begins.”

The captain added although it’s only a fraction of the roster, there’s a chance to start rebuilding chemistry and camaraderie.

“You’re being more cautious about how close you are to each other,” Tavares said. “[But] being with each other, passing the puck, getting a good workout in, being on the ice, everyone’s pushing each other … it’s been a blast just being around that again.”

And like the normalcy he’s felt this week, it isn’t lost on Tavares what hockey’s return will eventually mean for fans — many of whom have gone through trying circumstances during a pandemic that’s killed more than 7,800 people across Canada and impacted millions around the world.

“So many people are going through tough times,” he said. “The impact it can have on our communities and society, to help a lot of people through a tough time … it’s an opportunity for us to do many great things.”