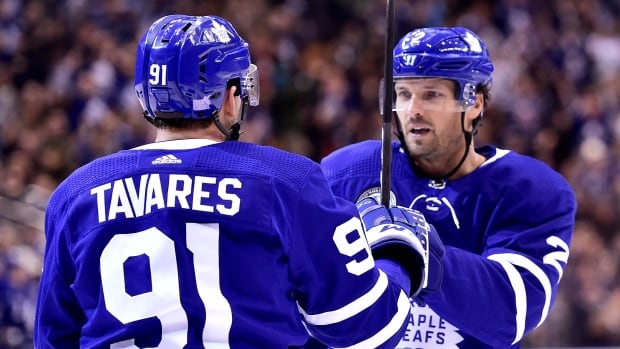 The Leafs dominated from the get-go but broke the game open in the second period, outscoring the Devils 4-1.

The Toronto stop was the sixth of a season-long seven-game road trip for New Jersey (6-7-1) that wraps up Sunday in Winnipeg. The Devils, 1-5-0 while outscored 29-15 on the trip, have won just two of their last 10 games (2-7-1) after opening the season with four straight home victories.

Marleau scored on a late tip but the goal was waved off upon review due to a high stick.

Veteran defenceman Ron Hainsey was involved in two of the goals with deft passes.

Travis Zajac scored for New Jersey, which despite the lopsided score got a decent game from goalie Keith Kinkaid.

The game was part of the leadup to Monday’s Hockey Hall of Fame induction ceremonies. Entering the Hall are former New Jersey goaltender Martin Brodeur, Martin St. Louis, Alexander Yakushev and Jayna Hefford in the players’ category, and NHL commissioner Gary Bettman and Willie O’Ree, the first black player in the NHL, in the builders category.

The 2018 HHOF class were on hand for the Hockey Hall of Fame game between the Toronto Maple Leafs and New Jersey Devils, the unofficial start of Introduction Weekend. 6:08

The six inductees were honoured prior to the game as the Leafs and Devils starters watched from chairs on the ice. Bettman, as he normally does, drew boos but took them in stride, flashing a smile as he cupped his ear.

The fast-paced ceremonies, which included a Remembrance Day tribute to veterans, took a crisp 15 minutes including two anthems.

Toronto, which is 6-0-0 away from home, plays at Boston on Saturday — the start of a four-game road trip that takes it to Los Angeles, San Jose and Anaheim. The Leafs are 5-5-0 at Scotiabank Arena.

Leafs goalie Frederik Andersen started his ninth straight game and produced another rock-solid performance that included a fine third-period stop on Devils star Taylor Hall. In his two previous outings (against Pittsburgh and Las Vegas), he had stopped 69 of 70 shots.

Kinkaid, who replaced Cory Schneider in the second period of Tuesday’s 7-3 loss in Ottawa, had a busy night in the Devils’ goal.

Fans held their breath when Tavares went down on a knee-to-knee hit that earned Sami Vatanen a kneeing minor. But the Leafs US$77-million man got up and almost set up Marleau on the power play.

Tavares opened the scoring at 12:24, deflecting in a slap-pass from Hainsey for his ninth of the season as the Leafs. Toronto’s speed, led by the elusive Mitch Marner, had the Devils running round in their own zone.

Outshot 15-7, New Jersey was likely fortunate to escape the period down by just one goal.

9 facts about the Hall of Fame inductees:

Kinkaid was called on again early in the second period, stopping Johnsson on a breakaway. But Kadri beat him at 1:52 of the period, roofing the puck from the faceoff circle after controlling it mid-air from Marleau’s milestone feed.

Brown made it 3-0 at 5:07, knocking in a Par Lindholm pass from close range that eluded two Devils defenders. Hainsey started the play with another terrific pass.

New Jersey cut the lead to 3-1 at 7:23, with Zajac banging in the puck from in-close after some fine work behind the goal by Blake Coleman, who outmuscled three Leafs.

Johnsson finally got his first of the season at 15:44, Johnny-on-the-spot after a deflected Jake Gardiner shot handcuffed Kinkaid. Just 1:43 later, Rielly notched his seventh of the season with an unlikely shot from the blue-line that beat a screened Kinkaid.

Ennis made it a 6-1 at 12:01 of the third with a slick goal, coming out of the corner and beating a defenceman before going top-shelf.