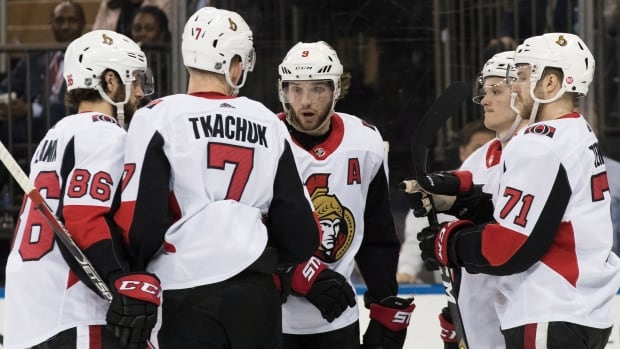 Brady Tkachuk had a goal and an assist and the Ottawa Senators earned a 4-1 win against the New York Rangers on Wednesday night.

Bobby Ryan, Zack Smith and Brian Gibbons also scored while Anders Nilsson made 27 saves as the league-worst Senators picked up their second win in the past three games. Colin White also had two assists.

Lias Andersson scored for New York and Henrik Lundqvist stopped 27 of 31 shots as the Rangers fell for the second straight game.

Ryan opened the scoring when he snuck a wrist shot past the glove of Lundqvist at 12:14 of the first period. Chris Tierney delivered the puck from below the goal line to set up Ryan for the power-play goal. Tkachuk also assisted on the play.

While skating down a man 1:15 after the first goal, the Senators doubled their advantage when Smith redirected a puck past Lundqvist. Smith’s ninth of the season was set up when he and Magnus Paajarvi executed a give-and-go around Rangers defenceman Kevin Shattenkirk.

Pavel Buchnevich, who returned after missing one game with an upper-body injury, also failed to pick up Smith driving to the net.

Ottawa converted on a two-man advantage at 3:51 of the second period to extend its lead to three. Tkachuk collected a loose puck near the side of the net and stuffed it home for his 22nd of the season. White and Thomas Chabot assisted on the play.

The Rangers converted a short-handed chance of their own when Anderson performed a nifty backhand, forehand deke to beat Nilsson at 4:52 of the second period. Vladislav Namestnikov and Brendan Smith assisted on the play.

Lundqvist, who has only two wins since Feb. 1st, was denied his 450th NHL victory for the sixth consecutive game.

Gibbons scored his eighth of the season at 14:58 of the third period to make it 4-1. White and Gibbons completed a nifty passing sequence that led to the tap-in opportunity to seal the game for the Senators.