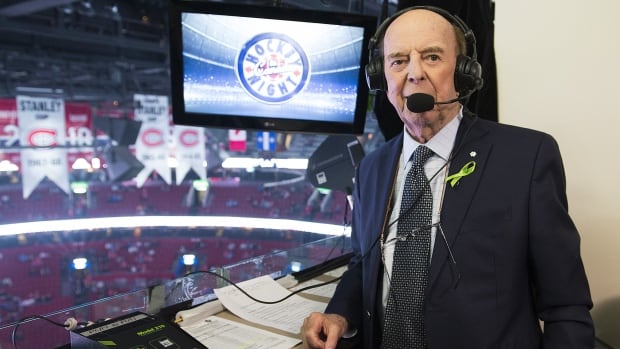 Bob Cole has always said the focus should be on the players — not him.

There was little chance of that on Saturday night.

The legendary play-by-play man called his last game for “Hockey Night in Canada” to cap a half century behind the microphone.

The regular-season finale in Montreal between the Canadiens and the Toronto Maple Leafs was meaningless in the standings, sharpening the focus even more so on the 85-year-old broadcaster.

“This game had been billed long ago as the biggest game of the season,” Cole said as he opened the telecast from high above the ice surface at the Bell Centre. “It was not to be, but pride is always on the line — Leafs and Canadiens.

The pre-game show on Sportsnet and CBC began with a montage featuring some of hockey’s great moments, with Cole’s voice providing the soundtrack.

The Montreal Canadiens paid tribute to Bob Cole, the legendary Hockey Night in Canada play-by-play voice, during his final broadcast. 1:14

“Mr. Cole, congratulations on 50 great years of hockey. You were an inspiration to all of us in Canada,” Gretzky said, before adding the broadcaster’s most recognizable line: “Ohhhhh baby.”

Players from the Leafs and Canadiens met with Cole and took pictures with him before the game, while his family was on hand to share the moment.

“You have to sell the song with your sincerity,” MacLean said in another video tribute right before puck drop. “That’s Bob’s magic.

“He sings the game.”

Cole’s career with HNIC started with a radio broadcast of a playoff game in 1969 at the old Boston Garden between the Bruins and Canadiens. He moved to TV in 1973 and would go on to describe countless hockey moments for millions of fans across the country.

CBC’s The National host Ian Hanomansing sat down with Bob Cole, the longtime play-by-play voice of Hockey Night in Canada, as he prepares for his final broadcast on Saturday. 11:05

There was the 1972 Summit Series, the Edmonton Oilers’ dynasty of the 1980s and Canada’s gold-medal victory at the 2002 Olympics that snapped a 50-year drought.

Cole saw his workload scaled back in recent years by Rogers, which took over national TV rights via Sportsnet ahead of the 2014-15 season. He didn’t call any playoff games last spring for the first time in his career, and got 16 dates on the 2018-19 season.

“You have to feel the game — breathe it — the timing, the sounds you’re creating,” Cole said in the night’s taped opening. “When you get 20,000 (fans) roaring after a play, it’s perfect.”

“The great players are special people,” he added. “I’ve enjoyed that over the years. It’s a great privilege.”

The night also included tributes to the Humboldt Broncos junior hockey team on the one-year anniversary of the devastating bus crash that killed 16 people and left 13 others injured.

As for Saturday’s game itself, playoff-bound Toronto jumped out to a 2-0 lead before Montreal, which was eliminated from post-season contention Friday, evened the score on the second goal by rookie Ryan Poehling, who was making his NHL debut.

“Poehling gets (the) second goal of his career! Wow!” Cole exclaimed. “What a night for this guy.”

Don Cherry praised Cole during his Coach’s Corner segment in the first intermission, which opened with archive footage of the pair.

“Foster (Hewitt) was good, Danny (Gallivan) was good,” Cherry said of Cole’s HNIC predecessors. “But the best of all, I think, and I’ve seen them all, is Bob Cole.”

Players, coaches and fans stood in appreciation to honour Cole in the second period as his four children joined him in the gondola he helped design at Bell Centre.

“Thank you so much Montreal and Canada,” he said to viewers, gazing from his perch. “It’s been a pleasure.

With the Leafs up 5-4, Poehling tied it with 2:31 left in regulation on his third goal of the game.

“The hats are going to rain down in Montreal!” Cole shouted. “What. A. Night. For this young man. Can you believe it?

“We will not go away. Keep it going.”

But following a breathless, end-to-end overtime where Cole sounded as good as ever, the game would end, with Montreal winning in a shootout as Poehling — who else? — scored the clincher.

“It’s been great here in Montreal,” Cole said as he signed off. “Thank you, so many people.

“We had some fun here tonight.”