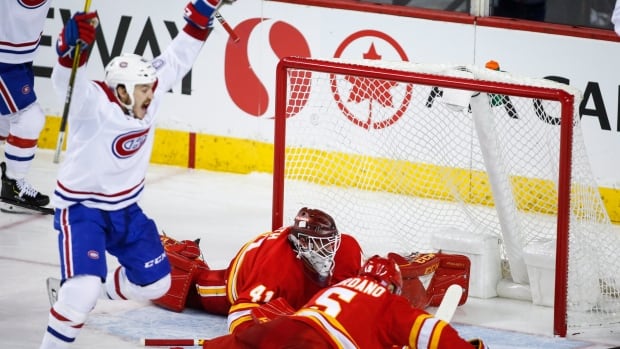 Lehkonen’s first goal in 18 games, dating back to the season-opener, came on a harmless-looking 40-foot wrist shot from off the wing that leaked through the pads of goaltender Mike Smith. Smith finished with 19 stops to fall to 5-7-1. Far busier at the other end was Carey Price, who had 43 stops to improve to 6-4-3.

Tomas Tatar and Jonathan Drouin also scored for Montreal (10-6-3), which has split the opening two games of its three-game Western Canada road trip. The Canadiens play in Vancouver on Saturday.

Max Domi had an assist for the Canadiens to extend his point streak to eight games (5-7-12).

Matthew Tkachuk scored both goals for Calgary (10-8-1). Tkachuk’s eighth and ninth markers of the season give him a team-best 21 points on the season. Mark Giordano had two assists. The Flames’ four-game homestand continues Saturday when they are host to the Edmonton Oilers.

Montreal tied the game 2-2 at 8:32 of the third. After a scramble in front of the net, Smith kicked out his pad to stop Andrew Shaw’s backhander, but Drouin was right there to slide in the rebound.

Trailing 1-0 after the first period, Calgary even it up at 3:43 of the second on a power play when Giordano sent a pass to Tkachuk, who ripped a slapshot into the top corner on Price.

The Flames took the lead at 15:53, this time it was TJ Brodie with the feed and Tkachuk with another hard one-timer.

Montreal opened the scoring eight minutes into the first as Tatar’s shot from the slot deflected off Smith’s upper body and went into the net.

Coming on the fifth shot he faced, it was the 10th time in 13 starts that Smith has surrendered a goal on one of the first six shots.