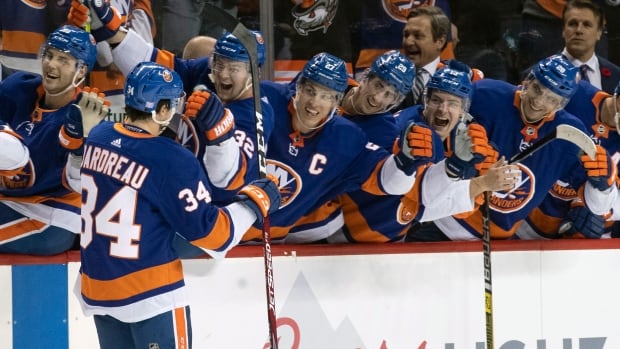 Cole Bardreau scored his first NHL goal on a penalty shot in the second period, and the New York Islanders beat the Ottawa Senators 4-1 Tuesday night for their 10th straight win.

Cal Clutterbuck and Casey Cizikas each had a goal and an assist, and Josh Bailey also scored to help the Islanders win their first game in Brooklyn this season and extend their winning streak to the second-longest in franchise history, trailing only a 15-game run Jan. 21 to Feb. 20, 1982. Thomas Greiss stopped 27 shots.

Jean-Gabriel Pageau had a goal for the Senators and Craig Anderson finished with 28 saves. Ottawa had won three of five after starting the season 1-6-1.

With the score tied 1-1 after one period, the Senators went on a power play early in the second. Ottawa, with the league’s worst man-advantage attack, had three shots on goal, including a slap shot by Anthony Duclair 5 1/2 minutes in and a wrist shot by Thomas Chabot 7 seconds later, but Greiss stopped them all.

Cizikas had a chance to put the Islanders ahead on a breakaway, but Anderson stopped his initial attempt and then the follow with 6 1/2 minutes left in the period.

About two minutes later, Bardreau had a breakaway but was pulled down by Mark Borowiecki to earn a penalty shot. The rookie skated in on Anderson and beat him through the five-hole for his first NHL goal in his seventh game. It was the second time the Islanders scored on a penalty shot against the Senators this season. Nick Leddy did it in a 4-2 win at Ottawa on Oct. 25.

Cizikas extended the lead to 3-1 at the midpoint of the third as he got a cross-ice pass from Clutterbuck and fired a slap shot past Anderson from the right circle for his first of the season and seventh career short-handed goal.

The Senators got on the scoreboard first on a short-handed goal with Artem Anisimov off for hooking Mathew Barzal. Islanders defenceman Ryan Pulock misplayed the puck behind the net and it lay there as Vladislav Namestnikov skated up and sent a pass in front to Pageau, who put it in on Greiss’ glove side at 7:44 of the first. It was Pageau’s sixth of the season and third in two nights.

Clutterbuck tied it with his first just 39 seconds later. Devon Toews fired a shot from the left point that was tipped by Cizikas in front but stopped by Anderson. However, Clutterbuck backhanded the rebound up high on the goalie’s glove side.