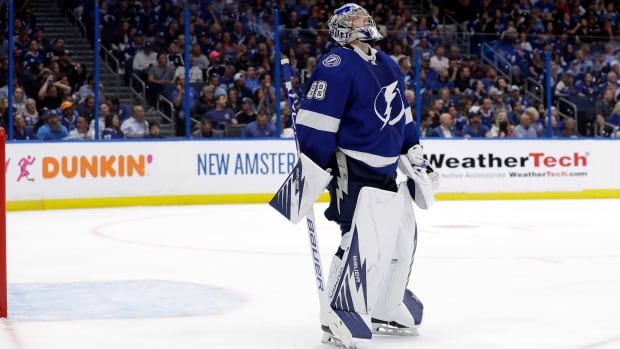 The Tampa Bay Lightning carved out their own slice of NHL history during a dominant regular season in which they tied the league record for most victories.

A fourth straight loss to the Columbus Blue Jackets on Tuesday, and the Lightning will have a chapter of NHL lore all to themselves. And not the good kind.

No Presidents’ Trophy winner has ever been swept in the opening round of the playoffs. Yet Tampa Bay finds itself three periods away from an unprecedented post-season exit heading into Game 4.

“It’s a tough position that we’re in right now,” Lightning captain Steven Stamkos said. “But we have to believe that with the group we have — whoever is in the lineup or not — that we can win a game and get back to Tampa.”

Making it worse is the prospect that defenceman Victor Hedman won’t be available for the Lightning in Game 4. Hedman missed Game 3 because of an undisclosed injury and remains doubtful for Tuesday.

The Columbus Blue Jackets edged the Tampa Bay Lightning 3-1 in Game 3 and are now just 1 win away from their 1st ever playoff series victory. 1:26

Three games against the largely unknown and decidedly unheralded New York Islanders have come and gone. The Penguins don’t have a win , Crosby doesn’t have a point and if Pittsburgh can’t find a way to solve New York’s byzantine defensive structure and red-hot goaltender Robin Lehner, a team that entered the playoffs in search of a third Stanley Cup in four years will head into an off-season of soul searching.

“We can’t get those games back at once,” Crosby said. “You’ve got to trust what’s gotten to you to this point and what our strengths are and how we’ve gotten here.”

Only four teams have ever climbed out of an 0-3 deficit to win a best-of-seven series, the last by the Los Angeles Kings against the San Jose Sharks in the 2014 Western Conference quarter-finals.

The Lightning have been outscored 12-2 since taking an early 3-0 advantage in Game 1 and Pittsburgh has led for all of 3:17 through nine-plus periods against the Islanders. Though Tampa Bay will get star Nikita Kucherov back after serving a one-game suspension for an illegal hit on Columbus defenceman Markus Nutivaara in Game 2, the Lightning understand their issues run far deeper than Kucherov’s absence.

“There are plays to be made out there that I think we left on the table,” coach Jon Cooper said. “We’ve just got to execute better, and that goes for everybody.”

It’s much the same in Pittsburgh. The Penguins own the NHL’s longest active playoff streak at 13 years and counting. Not once has their stay lasted just four games. Yet they have been unable to generate any sustained pressure against Lehner, a journeyman who is flourishing at the back end of coach Barry Trotz’s defence-first system.

The New York Islanders beat the Pittsburgh Penguins 4-1 in Game 3 and now have a 3-0 lead in their best-of-seven 1st round series. 1:14

Still, Lehner blanches at the idea that the Islanders — who have just one post-season series win since 1993 — are close to pulling off some kind of upset.

“It can’t be a surprise,” said Lehner, who has stopped 103 of the 108 shots he’s faced so far. “This team was no fluke this year. Everyone looks and compares players and all that stuff. I look at our roster and see a lot of really good players, and I see a really good organization and great coaching and great defencemen. I see a lot of heart. It shouldn’t be a surprise.”

Like New York, Columbus doesn’t have any recent history to draw from. Or any for that matter. The Blue Jackets have never reached the second round in franchise history. In fact, their 3-1 triumph in Game 3 marked the first time they’ve won as many as three games in a playoff series.

They’re well aware getting the fourth will be the hardest one of all.

“We’re a team that’s never gotten ahead of ourselves,” Columbus forward Nick Foligno said. “We’re excited about the opportunity we’ve given ourselves but we know it’s going to be the hardest game of the series.”

Maybe, but for both Pittsburgh and Tampa Bay, the hard work is just beginning if they want to pull off the improbable.

Penguins coach Mike Sullivan gave his team Monday off in attempt to give his players a chance to give their legs a rest. Sullivan, who has lost just once in 10 previous playoff series in Pittsburgh, planned to use the down time to catch up on “Game of Thrones.”

He knows more than anyone that if the Penguins can’t get it together, summer is coming earlier than anyone expected.