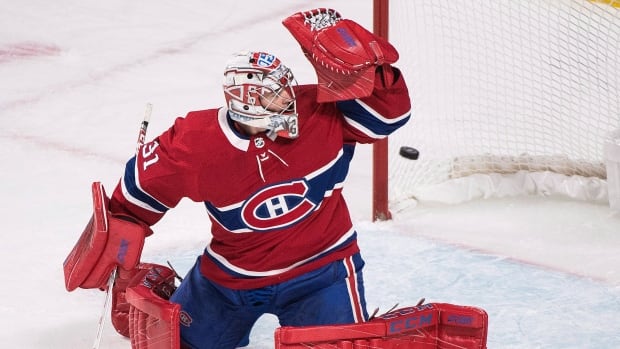 J.T. Miller and Yanni Gourde also scored for the Lightning (9-3-1), who remain first in the Eastern Conference. Anton Stralman had three assists.

Goaltender Andrei Vasilevskiy continued his dominant start to the season as he made 34 saves for his seventh victory.

Max Domi scored the only goal for the Canadiens (7-4-2), while Carey Price made 32 saves in defeat.

The Lightning improved to 6-0-0 against Eastern Conference opponents this season.

The Canadiens jumped to an early lead when Domi scored on the game’s first shot just 58 seconds after puck drop.

Domi intercepted a clearing attempt by former Canadiens draft pick Mikhail Sergachev at the blue line and evaded a check by Adam Erne before firing a wrist shot past Vasilevskiy for his seventh goal of the season.

No stranger to early goals, it was the third time this season Domi scored within a game’s first two minutes.

After intense pressure by the Canadiens to start the encounter, a boarding penalty by Nicolas Deslauriers changed the game’s momentum.

The Lightning scored the exact second Deslauriers’s penalty expired as Stamkos beat Price with a one-timer at 13:42 of the first.

Miller made it 2-1 at 16:24 after a skillful mid-air interception by Stralman gave Tampa Bay the puck in Montreal’s zone.

Following a scoreless second period, Stamkos added to Tampa’s lead 52 seconds into the third with a precise wrist shot into the roof of the net for his first multi-goal game of the season.

The Lightning are 3-0-0 this season when Stamkos scores.

Just one day after signing a six-year contract with Tampa, Gourde added an insurance goal with 4:03 remaining in the game as he swatted a loose puck in the crease across the goal line.

Montreal finished 0-for-4 with the man advantage. Coach Claude Julien’s men have not scored a power-play goal in their last 15 opportunities.

The Lightning have won five of their last six games versus the Canadiens.