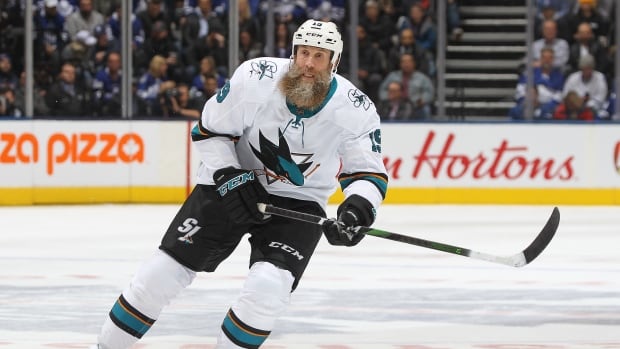 The Toronto Maple Leafs have signed 41-year-old forward Joe Thornton to a one-year contract worth $700,000 US.

Thornton, a six-time all star and the winner of the Hart Memorial Trophy as league MVP in 2006, is a veteran of 1,636 career NHL regular-season games between the Boston Bruins and San Jose Sharks.

The native St. Thomas, Ont., was selected first overall by the Boston Bruins at the 1997 NHL draft.

He was named captain of the Bruins before the 2002-03 season, but the struggling Bruins dealt Thornton to San Jose part way through the 2005-06 campaign.

Thornton had 33 points in 23 games at the time of the trade, and continued his torrid scoring pace with the Sharks. He finished the season with 125 points in 81 games and took home the Art Ross Trophy as the league’s leading scorer as well as the Hart Trophy.

Thornton is the second Ontario-born veteran to sign a league-minimum deal with the Leafs in this free agency, joining Jason Spezza.

Internationally, Thornton has represented Canada several times, capturing an Olympic gold medal (2010), two World Cup gold medals (2004, 2016), one gold medal at the 1997 junior championship as well as a Spengler Cup with Davos in 2005.