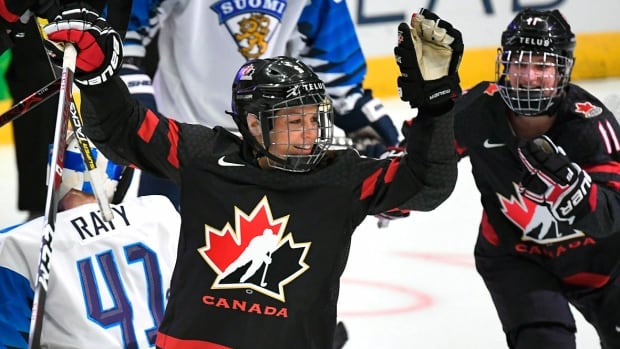 Loren Gabel had two goals and an assist to pace Canada to a 6-1 win over host Finland at the women’s world hockey championship Tuesday in Espoo.

Canada (3-1) finished second in Group A behind the unbeaten United States and will play Germany in a quarter-final Thursday.

Shannon Szabados made 22 saves for her second win of the tournament.

Finland goalie Noora Raty allowed three goals on 26 shots before she was replaced late in the second period by Eveliina Suonpaa, who had 23 saves.

Jenner wore the captain’s ‘C’ in the absence of Marie-Philip Poulin, who did not play after reinjuring a problem knee the previous evening in a 5-1 win over Russia.

All Group A countries and the top three in Group B advanced to the quarter-finals. The bottom Group B countries — Sweden and France — were relegated.

So Thursday’s other quarter-final matchups will be: United States and Japan; Finland and the Czech Republic; Russia and Switzerland.

The winner of U.S.-Japan meets the winner of Russia-Switzerland in one semifinal, while the Canada-Germany victor takes on the Finland-Czech winner in Saturday’s other semifinal.

The medal games are Sunday.

The Finns had momentum behind them after back-to-back wins over Switzerland and Russia.

But Canada, which lost 4-3 loss to the Finns in the preliminary round two years ago, quickly quieted the Metro Areena with a pair of first-period goals.

Ambrose and Nurse scored in a span of less than two minutes midway through the third to seal Canada’s victory.

Ambrose tipped a Jamie Lee Rattray pass by Suonpaa’s glove and Nurse beat the Finn far side with a wrist shot.

Viitasuo threaded a wrist shot through traffic, beating Szabados over the Canadian’s right shoulder at 2:42 of the third period.

Jenner scored Canada’s fourth goal at 18:23 of the second period. A give-and-go with Gabel in the neutral zone opened up the centre lane for Jenner.

Gabel collected her second of the night going top shelf on Raty with a wrist shot over the goalie’s far shoulder at 15:35 of the second.

Johnston scored her second of the tournament 14 minutes into the first period. Jill Saulnier dished from behind the net to Ambrose, whose shot careered off Raty’s shoulder for Johnston to bang in.

Gabel got her stick on a Bettez wrist shot to redirect the puck upstairs on Raty at 10:44 of the first, opening the scoring

Sweden, meanwhile, will not play in the top-tier world championship in Halifax next year for the first time in tournament history. The Swedes were relegated with a 3-2 loss to Japan.