The world’s best young hockey players are competing in Alberta this week, but despite the display of impressive talent, attendance has been low at some games.

The annual Hlinka Gretzky Cup kicked off on Monday, bringing the top under-18 NHL prospects together in Edmonton and Red Deer.

Attendance has been dismal at some of the daytime games, with large sections of seats left empty at Rogers Place during Monday’s game between Sweden and Slovakia.

Not sure what I expected but 🇸🇰🇸🇪 are playing in front of friends and family in the first Hlinka/Gretzky game. <a href=”https://t.co/bW7V7AAIp5″>pic.twitter.com/bW7V7AAIp5</a>

An Oilers Entertainment Group spokesperson wouldn’t disclose ticket sales, but Wayne Gretzky, who is in Edmonton to support the tournament, noted it will take time to grow the event.

“This isn’t going to happen overnight,” Gretzky told reporters Wednesday. “It’s a great hockey market and a great sport city. They had a nice crowd for game one and I’m sure as the week goes along, the Canadians will draw more and more people.”

Gretzky noted that when he played at the World Junior Ice Hockey Championship tournament in 1978, attendance at the Montreal Forum was low. Now, world junior games draw tens of thousands of people when Canada plays.

“This is a stepping stone,” Gretzky said about the Hlinka Gretzky Cup’s first year in Alberta. “Two years from now, it will be bigger and better.” 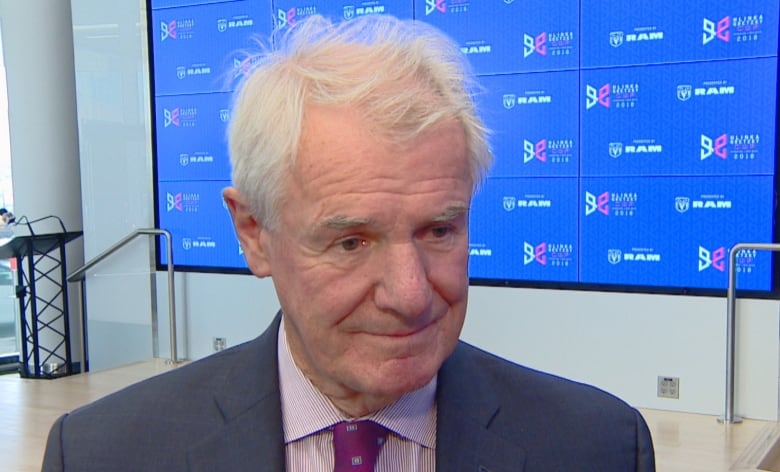 Al Coates is the executive director of the Hlinka Gretzky Cup. (Scott Neufeld/CBC)

Al Coates, the tournament’s executive director, said low attendance was expected, particularly for the first games, which took place on the Monday of the August long weekend.

He highlighted how attendance at Team Canada games has naturally been higher than that at non-Canada games. About 6,000 people made their way to Rogers Place Monday night for Canada’s game against Switzerland, he said.

When compared to Rogers Place, which has a seating capacity of 18,500, Red Deer’s smaller arena has had less empty seats.

“We actually purposefully selected the Servus Arena in downtown Red Deer, with a total seating and standing capacity of a little under 2,000. And that’s been two-thirds full or pushing being full on a nightly basis,” Coates told CBC News.

“So we’re happy. We didn’t have huge, huge expectations for this.”

He expects to see large crowds at the final.

“By the end of this week that we’re in right now, I think we’re going to see some unbelievably great results on people coming to the games on the weekend,” he said.

The bronze and gold-medal games will be played on Aug. 11 in Edmonton.