The top team in the NHL’s Western Conference tripped on the basement-dweller Monday when the Los Angeles Kings upset the Calgary Flames 3-0.

Flames goaltender Mike Smith turned away 18 shots in the loss.

Calgary (47-22-7) still topped the Pacific Division six points up on the San Jose Sharks, who were at home to Detroit later Monday.

Kings defenceman Drew Doughty was booed whenever he touched the puck at the Saddledome. He told Sportsnet earlier in the day he had “no respect” for Flames forward Matthew Tkachuk.

The two players have history dating back to Tkachuk elbowing Doughty in the head two years ago. Tkachuk served a two-game suspension for it.

Doughty and Tkachuk tangled early in the third with Doughty taking a slashing penalty. 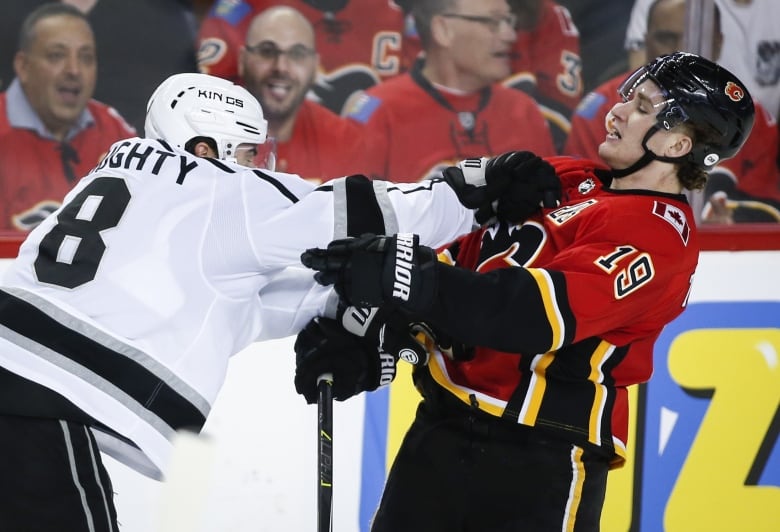 A healthy scratch in three of the last four Kings games, forward Ilya Kovalchuk did not accompany the team on their three-game road swing through Calgary, Edmonton and Vancouver.

After a scoreless second period, Kings centre Brodzinski beat Smith with a wrist shot from the top of the circle at 11:51 of the third for a 2-0 lead.

Calgary trailed 1-0 after two periods despite outshooting the Kings 31-14.

Los Angeles ended the first period and opened the second with a two-man advantage, but didn’t generate a goal with it.

Forbort threaded a soft wrist shot through traffic to beat Smith glove side 57 seconds after the opening faceoff.