Nathan MacKinnon and Tyson Barrie scored a minute apart to ignite a four-goal second period as the playoff-chasing Colorado Avalanche rallied for a 6-2 win over the Edmonton Oilers on Tuesday night.

Down 2-0 after the opening period to an Edmonton team already eliminated from postseason contention, the Avalanche surged in the second. MacKinnon started the scoring spree with his 40th goal of the season, while Barrie, Alexander Kerfoot and Colin Wilson joined in. All four goals were scored in a 7:08 span.

Kerfoot and Sven Andrighetto added insurance goals in the third.

The Avalanche began the day two points in front of Arizona for the final wild-card spot in the West. The Coyotes played later Tuesday. Colorado has two games remaining.

Goaltender Semyon Varlamov shook off some early rust in his first appearance since March 15 and finished with 27 saves. He was stepping in for a sizzling Philipp Grubauer for the second game of a back-to-back.

Koskinen had a spectacular save early in the second period with Colorado on the power play. On his back, Koskinen reached his arms over his head and just so happened to deflect MacKinnon’s shot with his glove at the goal line.

Soon after, MacKinnon and the Avalanche broke the game open.

With his goal, MacKinnon joined Joe Sakic (three times) and Milan Hejduk (twice) as the only Avalanche players to reach the 40-goal mark since the franchise relocated to Denver. 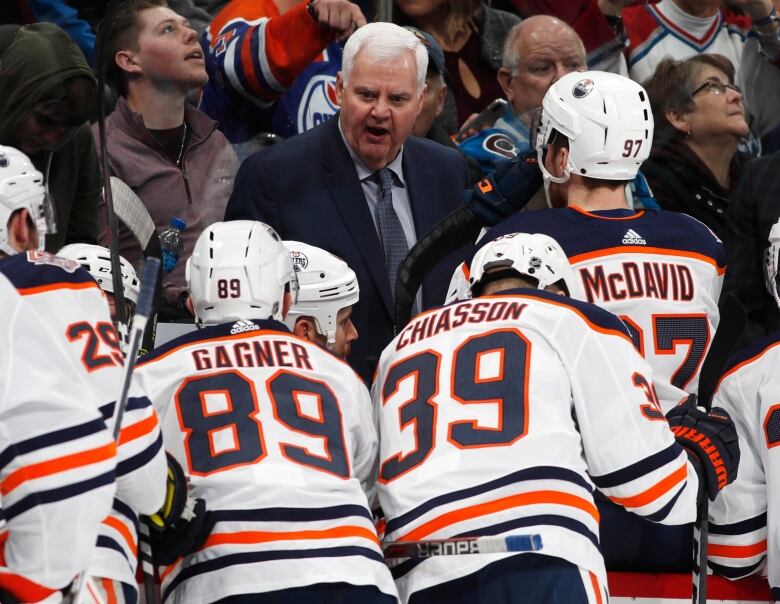 Edmonton Oilers head coach Ken Hitchcock talks to his players after they gave up three goals to the Colorado Avalanche in the second period. (David Zalubowski/The Associated Press)

Kerfoot knocked in the go-ahead goal late in the second period. It was his second straight night with a big tally. In St. Louis on Monday, Kerfoot tied the game in the final minute to secure a valuable point before Colorado lost in a shootout.

Lucic scored his first goal since Jan. 19, and Nurse added another in a dominating first period by Edmonton.

Connor McDavid and the Oilers were eliminated from the postseason Monday. McDavid said that night after a loss in Vegas his frustration level was high in missing the playoffs for a third time in his four seasons.

“If you’re frustrated it usually gets replaced sometime during the summer by determination,” Hitchcock said in an interview posted on the team’s website. “When you put as much into the season as a lot of these players put in and you don’t have success, you’d hope they’d be frustrated, and angry and disappointed and whatever other emotion you want to go there.”