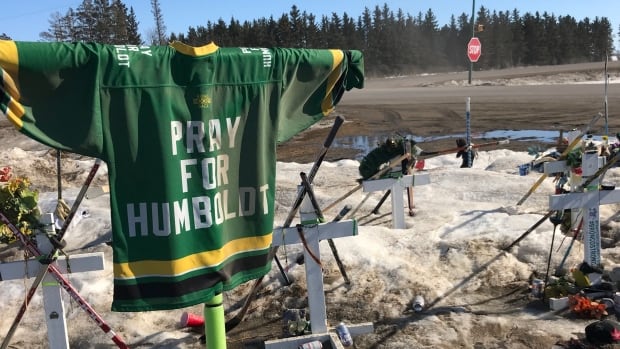 A man who set up a fake online fundraiser for the Humboldt Broncos following the Saskatchewan hockey team’s deadly bus crash has been sentenced to 14 months in jail.

Andrij Olesiuk was sentenced Tuesday to a total of 14 months in jail for that offence, and for also running an elaborate scheme to scam a B.C. family out of $65,000.

In January, he was found guilty by a provincial court judge in Saskatoon of fraud under $5,000 and possession of stolen property obtained by crime in connection with the Broncos fundraising scam.

Court heard Olesiuk raised about $3,900 through a GoFundMe account after the crash, but instead of the money going to the team, it was deposited into his personal account and spent.

During his trial, Olesiuk testified he closed down his account and gave $4,100 in cash to a woman who had come to his door collecting donations for the Broncos.

Court heard he lost the donation receipt in a house fire and couldn’t remember which organization the woman collecting donations was affiliated with.

Sixteen people were killed and 13 others were injured when a bus carrying members of the Broncos junior hockey team collided with a semi-truck at a rural intersection in April 2018.

Court heard that crime was likely only discovered because of a police investigation into the larger fraud involving a B.C. family.

During Tuesday’s sentencing, he also pleaded guilty to an investment fraud worth $65,000 that took place before the Broncos fundraiser.

Howarth explained to the court that Olesiuk was an employee of a couple whose business operated across Western Canada.

He told the couple that he was a stockbroker and the CEO of a company called Arrow Capital Inc. which he said was registered in New York City and Saskatchewan.

Olesiuk provided them with official-looking documents, one of them signed with an apparent New York stockbroker number, and other fraudulent documents.

But the company did not exist and Olesiuk kept the money. Howarth said in court the perpetrator continued to live off that money until he received the funds from the fraudulent GoFundMe campaign.

“Whatever his intentions, it was a scam right from the start,” said Howarth in court.

In victim impact statements read to the court, the B.C. couple said they had to sell a house below market value because of the money they lost to Olesiuk. Their family member said they had lost money they needed for their retirement and it had caused a strain in the family relationship.

Two sentences to be served consecutively

Olesiuk was sentenced to three months in jail for the Humboldt fundraiser and 11 months for the other scheme. The judge ruled he must serve those sentences consecutively.

He will be subject to a 12-month probation after the jail sentence and a five-year ban on having authority over other people’s money or running online fundraisers.

The sentence was a joint submission agreed upon by the Crown and the defence and adopted by the judge.

Howarth said the fact that Olesiuk pleaded guilty to the larger fraud offence was a mitigating factor when it came to sentencing for that offence.

“I think ultimately the sentence is appropriate under all the circumstances,” he said.

“It is a sentence which does send a message that it is behaviour that is going to face meaningful consequences.”