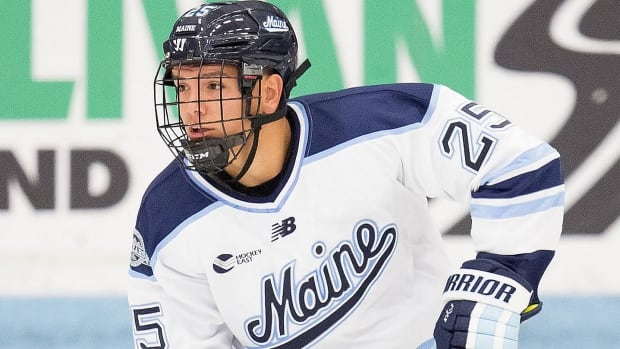 A Manitoban from Pimicikamak Cree Nation is headed to the National Hockey League.

Brady Keeper, who played with the Opaskwayak Cree Nation Blizzard before going on to play for the University of Maine hockey team, signed a two-year contract with the Florida Panthers.

“He’s a skilled puck-moving defenceman,” said Alfie Michaud, Keeper’s coach at the University of Maine and a fellow Manitoban, from Selkirk. “He moves [the puck] quick, he thinks very quick, he’s got a lot of upside to him because he’s such a raw talent.”

Keeper, 22, has come a long way from where he started, Michaud said.

“It’s bittersweet to see him go, because you see where he was and what he’s become. But at the same time, at least you feel that you can keep helping him and grow.”

News of Keeper’s signing was met with an outpouring of support from folks back home. Michaud said a post on his Facebook page has received more than 1,000 comments.

“His community has been going through a lot of tough times here, probably within the last five years. And so to have him come from that community, I guess he’s that beacon of hope for a lot of those kids,” Michaud said.

Life away from home hasn’t always been easy for Keeper, Michaud said. When he first arrived at the university, Michaud said, Keeper bought several plane tickets to fly back home, but always cancelled them, eventually maxing out his credit card.

“I think he did that three or four times in a five-day stretch,” Michaud said, but he and the other coaches convinced Keeper to stay.

Michaud was in the room when Keeper signed the NHL contract and when he put down the pen, he had a big smile on his face, Michaud said. Nevertheless, Keeper does feel apprehensive about some aspects of his new career, Michaud said.

“I asked him if he’s scared, and he said yeah.… For him, he was scared about the interviews,” Michaud said. “He’s a shy kid, he’s a humble kid, he stays to himself.… He’s more worried about getting a phone call from a reporter or having to talk in front of a camera than he is about the actual hockey.”

Making a career in the NHL won’t be easy, but Michaud has confidence in his protege.

“The test for him, it’s not only going to be physical — the mental grind of the National Hockey League, day in and day out, what’s expected of you. As long as he commits to it both physically and mentally, he’ll be fine.”