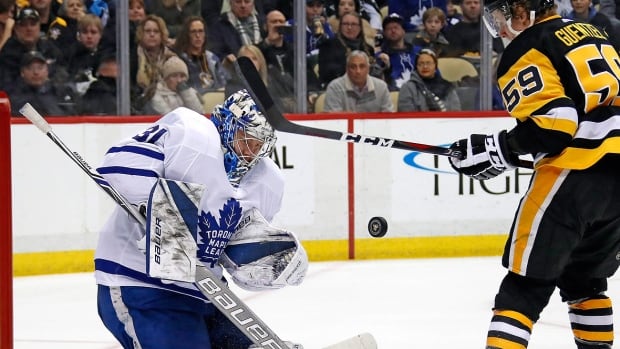 After Frederik Andersen was a surprise injury scratch for Monday’s 4-1 victory over the Los Angeles Kings, Toronto Maple Leafs head coach Mike Babcock said definitively that his No. 1 goalie would be back in the crease Thursday against the visiting Pittsburgh Penguins.

Everyone was a lot less confident that would be the case roughly 15 hours later.

Andersen was on the ice at the start of practice with his teammates Tuesday, but departed after about 20 minutes, leaving backup Garret Sparks and Eamon McAdam, an emergency recall from the Newfoundland Growlers of the third-tier ECHL, to complete the session.

Frederik Andersen showing off his stickhandling before Leafs’ practice. Garret Sparks and Eamon McAdam also on the ice. <a href=”https://t.co/4Z4zy8Do26″>pic.twitter.com/4Z4zy8Do26</a>

Andersen, who said leaving the skate early was part of the plan, could be seen stretching out his left knee between drills. The Dane indicated afterwards he tweaked something in Saturday’s 4-2 victory over the Washington Capitals that wrapped up a perfect 4-0-0 road trip.

Sparks made 33 saves in the victory over Los Angeles, a big improvement from the six goals he allowed in a wild 7-6 overtime triumph against the Chicago Blackhawks on Oct. 7.

The Leafs are thin in goal even with a healthy Andersen after losing Curtis McElhinney and Calvin Pickard on the waiver wire before the start of the season.

Kasimir Kaskisuo of the American Hockey League’s Toronto Marlies was injured over the weekend and Jeff Glass, the Marlies’ backup, is on an AHL-only contract.