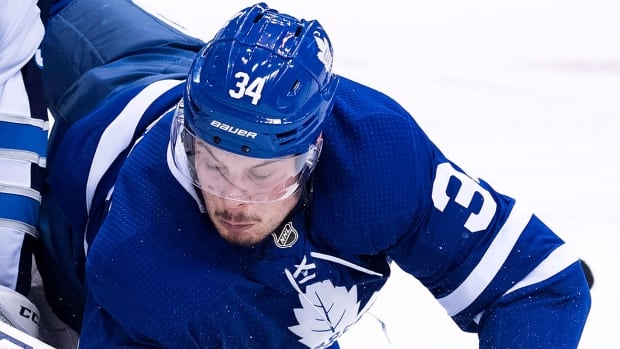 Toronto Maple Leafs third-year stud Auston Matthews had high hopes he would enjoy a healthy 82-game schedule this season after he missed 20 games a year ago with three separate injuries.

But that optimism came crashing down over the weekend when he suffered a left shoulder injury as the result of a shoulder-to-shoulder hit delivered by Winnipeg Jets defenceman Jacob Trouba at the side of the net on Saturday evening.

The Maple Leafs scored a 3-2 come-from-behind win without the 21-year-old Matthews, but 48 hours later the club announced their talented centre would miss a minimum of four weeks with his latest ailment.

“It’s a challenge, just because you want to be out there so bad,” he said on Monday morning, prior to his team playing host to the Calgary Flames. “It sucks. I think watching the game is probably the worst part.”

Watch how Matthews hurt his shoulder:

The frustrating part for Matthews was he worked hard over the summer to strengthen his shoulders after he suffered a right shoulder separation late last season. But it was good news that he didn’t suffer an injury to the same shoulder this time around. It’s also better Matthews will be missing in action early in the season rather than late in the year when the team is gearing up for the playoffs.

Matthews missed a month from late February to late March last year with his separated right shoulder. He returned to play in the final nine games of the regular season, but he was clearly out of sorts in the first round of the playoffs, scoring just one goal and an assist in the seven-game loss to the Boston Bruins.

“It’s obviously tough for him,” said Toronto head coach Mike Babcock, who has encouraged his star player to hang around his teammates as much as possible as he recovers.

“Your mental health is the most important thing in any walk of life. So when things don’t go the way you want and it affects you mentally, how are you going to handle that? We talked about that this morning. Be around the group and do what you do. The great thing about hockey is it’s a team game.”

Kyle Dubas, the general manager of the Toronto Maple Leafs, has been called a lot of things: a whiz kid, a maverick, a stats geek. The names are a reflection of Kyle’s new-school approach to management. And he’s joining the team at a time when the pressure to perform couldn’t be greater. 10:10

The Maple Leafs went 11-7-2 without Matthews last season. They can cope in the short term without him. They’re off to a stellar start this fall with an 8-3-0 record, tied for top spot with the Nashville Predators, so there is not much pressure on this bunch to continue to pile up the wins without Matthews.

This setback also does not necessitate the Maple Leafs management to come off its hardened position in the contract dispute with William Nylander. This team was heralded to have depth and now is the time for players like Nazem Kadri to step up in Matthews’ absence.

“I have never met one guy who says, ‘coach, can I play less?’ They always want more opportunity,” Babcock said. “Someone always thinks they are getting the short end of the stick. We only have 12 forwards. They all get their chance. Show me.”

Kadri did just that on Saturday without the team’s No. 1 centre. It was his turnover that resulted in the Jets’ 2-0 goal from Mark Scheifele in the second period, but it was Kadri who ignited the three-goal outburst in the final frame with his second in as many games early in the third period.

Babcock remarked that nobody will be summoned from the AHL Toronto Marlies. Instead, as on Saturday, Kadri will be slotted between Patrick Marleau and Mitch Marner, John Tavares will centre Zach Hyman and Kasperi Kapanen.

It’s never easy to replace a game-breaker like Matthews and his 10 goals in 11 games. But the Maple Leafs can and will survive the next 15 games in the next four weeks without him.