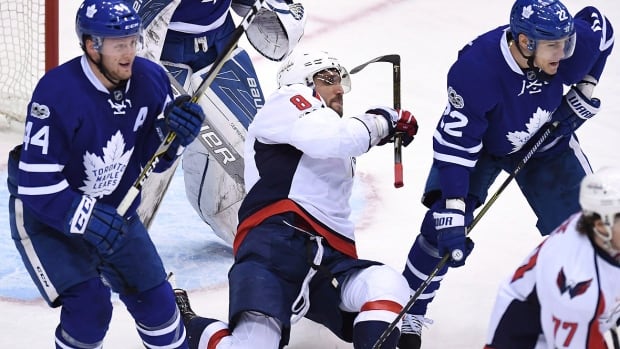 In the hours after his stunning move to the Toronto Maple Leafs, an unprompted John Tavares went out of his way to praise the team’s most maligned group — its defencemen.

Part of a response to a general question about style of play, the brief exchange showed that while the meticulous star centre was new to town, he was also keenly aware of the perception surrounding what has been viewed from the outside as the franchise’s weak link.

“I know the defence has been talked about here over the [last] little while,” Tavares told a packed room of reporters on July 1. “But I remember how tough they were to play against.”

Tough or not, those concerns remain.

Vaulted among the favourites to hoist the Stanley Cup after Tavares left the New York Islanders in free agency to join Auston Matthews and Toronto’s elite forward group that nicely complements Frederik Andersen’s steady play in goal, the Leafs still lack a true No. 1 defenceman.

The top four of Morgan Rielly, Jake Gardiner, Ron Hainsey and Nikita Zaitsev remain from last year, while the bruising Roman Polak left in free agency, leaving Travis Dermott and a host of youngsters to vie for rest of the roster spots at training camp.

“We have a lot of confidence in ourselves,” Rielly said. “You hear about the doubts [with] the blue line … you take that personally and you use it as motivation.

Rielly and Gardiner, who can become an unrestricted free agent next summer, are each coming off career-high 52-point seasons — only two other teams had defence duos record 50-plus points. But in a perfect world, they would play second and third fiddle to an Erik Karlsson, Victor Hedman or Drew Doughty.

Those players, unfortunately for the Leafs, don’t grow on trees.

“I’ve been consistent in saying I do like our defence,” said first-year Toronto general manager Kyle Dubas. “When people ask about it, I think they’re asking, ‘Can you go out and land one of these high-end, top-defenceman-in-the-league-type people.’ I think that underestimates what Morgan and Jake have done.

“With Zaitsev healthy, with Travis Dermott continuing to develop, with Ron Hainsey there to solidify things, and then we’ve got a real good group of younger people coming up behind them … I’m excited.”

That doesn’t mean the Leafs aren’t continuing to search for improvements.

Toronto has taken defencemen in the first round of the last two drafts — Timothy Liljegren and Rasmus Sandin — while Connor Carrick, Justin Holl, newly-signed former KHLer Igor Ozhiganov, Martin Marincin, Andreas Borgman and Calle Rosen are in the mix for spots six through seven or eight with the Leafs coming out of camp.

Carrick and Holl both would need to clear waivers to be sent down to the Toronto Marlies of the AHL.

“I’ve always considered it a privilege to compete at this level,” Carrick said of trying to crack the lineup. “It will be a great challenge.”

Head coach Mike Babcock said apart from the veteran Hainsey, the defence corps has plenty of room to grow. Toronto had a respectable team goals-against average of 2.88 last season, but gave up the fourth-most shots in the league at 33.9 and was in the middle of the pack in even-strength shot attempts for at 49.81 per cent.

“I think the group is real good,” Babcock said. “A lot better than a lot of people think.”

Hainsey, meanwhile, said team defence will be a focus in camp, especially in the neutral zone before opponents have a chance to set up as Toronto looks to push into the second round of the playoffs for the first time since 2004 after back-to-back early exits.

Dubas, who took over as GM for Lou Lamoriello in the spring, is confident Toronto can get by with the type of star-less blue-line Babcock will once again ice on opening night.

“A number of teams in the league that have done it without those type of players in the last number of years,” said Dubas, 32. “We have some history recently that shows [a] team can have ultimate success with that style of defence group.”

Set to enter his sixth season, the 24-year-old Rielly said the faith management has shown is not lost on the current group.

“We take it as a compliment from Kyle and the coaching staff for keeping us together,” he said. “It’s up to us to improve and work hard to be the best we can be.”

With the strengths the Leafs have elsewhere, that might end up being good enough.