Mick Roberts is a huge Leafs fan, but his family has never been able to take him to a game — until last week, thanks to the support of strangers, their local community and the Leafs organization.

Very, very emotional, because I know that he can’t do things that everybody else can do.– Mary Roberts

Roberts, 26, has Duchenne muscular dystrophy, a genetic disorder characterized by progressive muscle degeneration and weakness. His mobility and speech are severely limited.

His mother, Mary Roberts, told CBC the opportunity was “unbelievable.”

“Amazing. Very, very emotional, because I know that he can’t do things that everybody else can do,” she said. 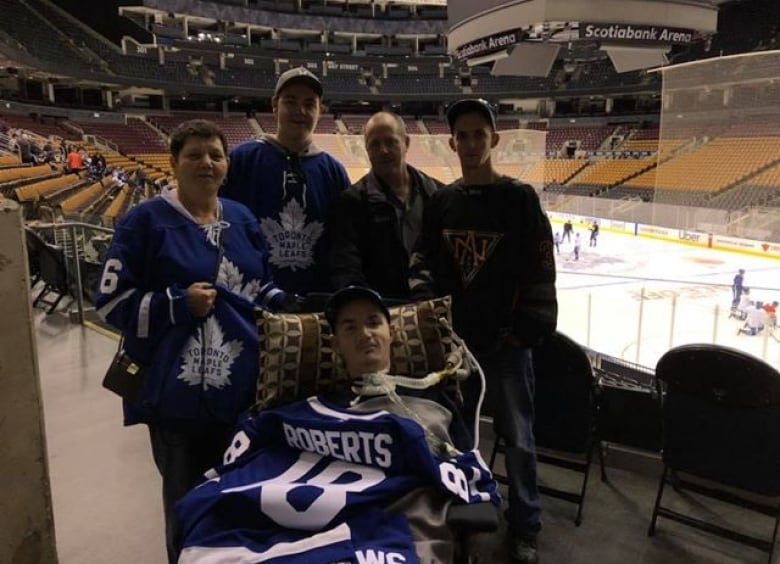 Mick Roberts and his family, at the Oct. 6 game at Scotiabank Arena in Toronto. (Submitted)

To make the trek to Toronto a reality for Mick and his family, a GoFundMe account was set up by a complete stranger in Perth, Ont.

In five days, the goal of $6,000 was met and surpassed, allowing them to make the drive from Newfoundland to Ontario.

Mick was first diagnosed with muscular dystrophy at the age of 3. It can be an isolating disease. Mick now requires 24-hour care, and needs a ventilator to breathe.

We could never afford it … and all the people that supported me, it was awesome.– Mick Roberts

“He said, ‘All these years wanting to go to Toronto, and see a Toronto game, we could never afford it … and all the people that supported me, it was awesome.’ He can’t get over it. And actually the tears came to his eyes when we told him, and he’s so excited, my son, I’m telling you, it’s out of this world. It’s unbelievable how he’s feeling.”

Mick and his family got to tour the Scotiabank Arena on Saturday, met with the Leafs players, and then watched the game against the Ottawa Senators.

With files from the Central Morning Show