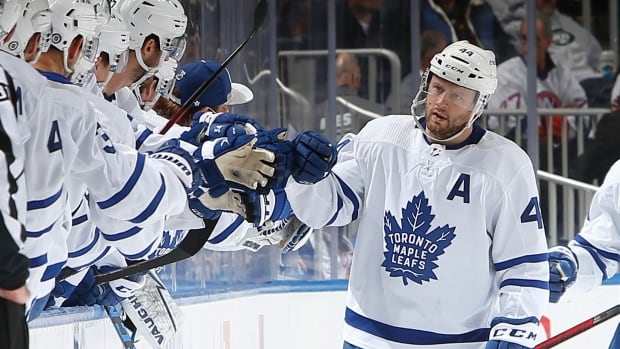 Zach Parise got his second of the season for New York, and Semyon Varlamov made 20 saves. The Islanders lost in regulation at home for the second time in 10 games (7-2-1) after dropping their first seven (0-5-2) at the $1.1 billion US UBS Arena.

Engvall helped Toronto regain an advantage when he beat the buzzer with 1 second left in the first period to give the Maple Leafs a 2-1 lead. The 25-year-old forward completed a nifty forehand-backhand maneuver before sliding a puck between Varlamov’s legs.

Rielly made it 3-1 when he buried a cross-ice feed from William Nylander at 9:42 of the second period. Islanders forward Austin Czarnik was caught watching the puck and lost defensive positioning on Rielly. Alexander Kerfoot also assisted on the play.

Marner opened the scoring with a short-handed goal 6:35 into the game. Rielly stripped the puck from Mathew Barzal in the defensive zone and sent a fluttering puck down the ice that Marner tracked down before guiding a puck past Varlamov. Toronto’s alternate captain also scored down a man in the Maple Leafs’ 3-0 win against the Islanders here on Nov. 21.

Parise tied it with 1 minute left in the opening period. Islanders defenceman Scott Mayfield sent a bouncing puck into the offensive zone that eluded Toronto’s Timothy Liljgren before Parise roofed a backhand over Mrazek’s glove.

The Islanders honoured Hall-of-Fame forward Clark Gillies, who died Friday, with a video tribute and a moment of silence prior to the start of the game. The power forward was one of 16 players to win four straight Stanley Cups and 19 straight playoff series with the Islanders during the dynasty years in the early 1980s. New York also wore a No. 9 decal in the upper right-hand corner of their jersey in remembrance of the former captain.