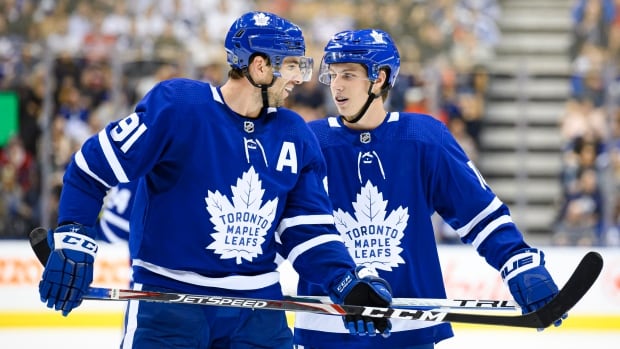 Some high-profile athletes are rallying around a young Toronto Maple Leafs fan after the boy’s dad tweeted that the 11-year-old had a disappointing birthday.

Leafs forwards Mitch Marner and John Tavares are among those sending birthday wishes to Kade Foster in response to a viral tweet from his father, Jason Foster of Corner Brook, N.L.

Foster wrote that none of Kade’s friends showed up to the Saturday night party.

“That hurt. I’m asking my Twitter friends to show him some love today. If you have a minute, please send him a birthday wish,” he wrote, tagging Marner and Tavares.

A photo linked to the tweet shows Kade in a Maple Leafs T-shirt, a Leafs birthday cake in front of him.

“Wanted to wish my friend Kade a Happy 11th Birthday! Your friends from the Maple Leafs have a surprise gift coming your way!” Marner tweeted in response.

Tavares added that he was “looking forward to celebrating” with Kade.

By Sunday evening, Foster’s post had been shared more than 10,000 times and garnered at least 25,000 responses, including messages from Prime Minister Justin Trudeau and actor Ben Stiller — who specified that he doesn’t play hockey.

Lance McCullers Jr., a pitcher for the Houston Astros, also sent birthday wishes to Kade and offered to meet up with him in Toronto after the team plays there in May — but only if Kade wants.

Foster tweeted his thanks several hours after his initial message went out.

“We can’t comprehend what has happened today. Kade and the rest of us are just amazed,” he wrote. “To everyone who sent Kade a message — thank you from the bottom of our hearts.”

Wishing Kade the happiest of birthdays!<br>Your pal, Mar🐫 <a href=”https://t.co/86tZwfP0qB”>pic.twitter.com/86tZwfP0qB</a>