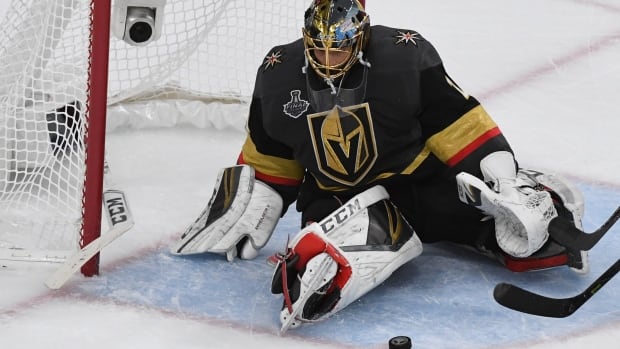 The Vegas Golden Knights have agreed to terms with three-time Stanley Cup champion goalie Marc-Andre Fleury on a three-year contract extension worth an average of $7 million US per year.

Fleury had one year remaining on his contract. The extension announced Friday would keep him with Vegas through the 2021-22 season, creating the possibility that the 33-year-old Fleury could end his career with the Golden Knights.

Fleury helped the Golden Knights to the Pacific Division title and an appearance in the 2018 Stanley Cup Final in their inaugural season.

The Vegas Golden Knights goaltender made 14 straight saves to win the new event at the NHL All-Star Skills Competition 5:17

The Golden Knights selected Fleury in the 2017 expansion draft from the Penguins. He won 29 games last season, including the 400th victory of his career. He registered the best statistical regular season of his career with a goals-against average of 2.24 and a save percentage of .927. He has 404 career wins in 737 games between Pittsburgh (691 games) and Vegas (46) and ranks 11th in victories in NHL history.

He appeared in all 20 games for the Golden Knights in the playoffs, where Vegas’ storybook season ended with a loss to the Washington Capitals in the Stanley Cup Final.

“It was a good season, I think the numbers are something, but they don’t always show the game and stuff, but I think my teammates are a big part of it,” Fleury said one day after the Golden Knights’ season ended. “They were a big help to me all this season. I don’t know, it’s weird. A year ago, I was told I was getting too old to play, I still had a lot of fun. Vegas has given me this opportunity to do a lot, I wouldn’t want to go anywhere else, and hopefully I can finish my career here.”