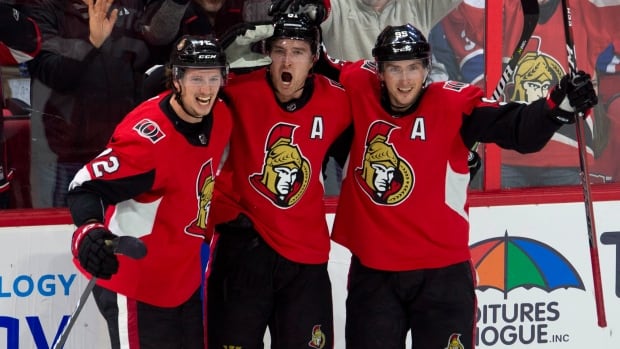 Mark Stone tried something new on Saturday and it paid off.

Stone scored his second goal of the game at 2:30 of overtime as the Ottawa Senators overcame a 3-1 deficit to defeat the Montreal Canadiens 4-3 on Saturday.

“New curve tonight so I was putting it to the test and it worked,” Stone said.

“I’ll be honest with you, I was getting pretty tired. I had one chance to try and finish it and I took it.”

Stone’s one-timer from the face-off circle beat Carey Price for the game winner.

“He’s a better shooter than he thinks he is, I know that,” Duchene said of Stone’s shot.

“He’s a big guy, a big strong guy, long stick and he hammered that one so it was great to see.”

Stone had a goal and an assist in regulation while Mikkel Boedker and Matt Duchene also scored for the Senators (4-2-1). Craig Anderson made 24 saves.

Price stopped Chris Tierney on a breakaway in overtime while Ryan Dzingel had another opportunity to give the Senators the win moments earlier but the puck rolled off his stick while he had an empty net to shoot at.

The Canadiens led 3-1 entering the second period but a pair of goals from the Senators, including one on the power play, levelled the teams at 3-3 heading into the third.

“We didn’t move the puck well late in the game and we had a lot of unforced errors,” Canadiens coach Claude Julien said, turning aside talk that his team was tired.

“We didn’t have a morning skate [Saturday] so there is no reason for anyone to be tired.”

Boedker scored his second of the season as he popped one over the shoulder of Price from the goal line at 9:41 cutting the Canadiens lead to 3-2.

A little more than two minutes later Duchene scored his first of the season as he completed a three-way passing play and beat Price with a quick shot while the Senators were on the power play.

“We hung in there. The goalie made some big saves in the second period to keep it at 3-1 and then we got a big power-play goal from [Boedker],” Stone said.

In the opening period the Canadiens build a 2-0 lead with the game barely four minutes old.

Domi got his second of the season on the power play at 3:40 and Danault scored at 4:05 to get the Canadiens off and running.

“We played a good first period. All four lines played well and we had them on the ropes,” Byron said.

“The second and the third we just didn’t play well. There were a lot of mistakes mentally. They were pushing on us and forechecking and we weren’t generating any offence and playing way too much in our own zone.”

Stone got one back for the Senators at 7:14, taking advantage of a turnover deep in the Montreal end.

“There were some mistakes from us but a lot of that had to do with the way they came out. We knew that was the best that we had and the Stoney got that big goal to get us back to within one. We kept the game close and sometimes that’s the key until you can fight back,” Duchene said.