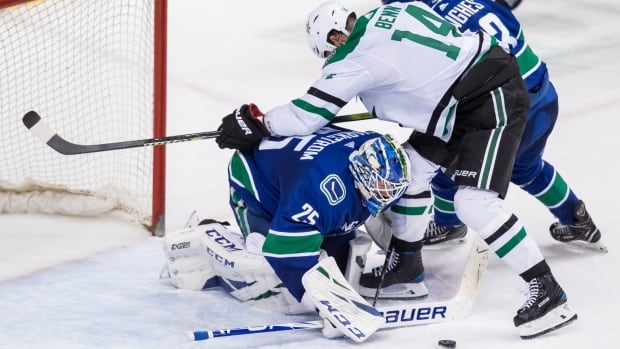 Markus Granlund scored in the eighth round of the shootout on Saturday, leading the Vancouver Canucks to a 3-2 victory over the Dallas Stars.

Tim Schaller and Sven Baertschi scored in regulation for the Canucks (34-35-10), who were officially eliminated from the playoff race on Friday.

Andrew Cogliano and Alexander Radulov responded for the Stars (41-31-7), who fell just short of a playoff-clinching win after erasing a 2-0 deficit in the third period.

Canucks goalie Jacob Markstrom stopped 38-of-40 shots in regulation and Anton Khudobin put up 29 saves for the Stars.

The loss snapped a three-game win streak for Dallas.

Vancouver’s playoff chances ended when the Colorado Avalanche beat the Arizona Coyotes 3-2 in a shootout on Friday.

Schaller opened the scoring when he scooped the puck from behind the net and wrapped a back-handed shot around, poking the puck under Khuodobin’s pad 4:52 into the game.

The tally marked the left-winger’s third goal of the season. All three have come in games against the Stars this month.

Baertschi added another marker 11:16 into the first, picking up the puck at the blue line, streaking into the offensive zone and sniping a wrist shot from the bottom of the faceoff circle.

The shot beat Khudobin five-hole and marked Baertschi’s first point since returning from symptoms of post-concussion syndrome that kept him sidelined for 23 games.

Markstrom stopped every shot he faced through nearly two-and-a-half periods before Cogliano beat him with a wrister 9:14 into the third period.

Radulov added another goal 14:11 into the final frame, sending a long wrist shot sailing toward the Canucks net. The puck appeared to bounce off Vancouver defenceman Troy Stetcher and in.

Tyler Seguin nearly finished the game with less than two minutes left, snapping a closer-range shot at Markstrom. The Canucks netminder trapped the puck under his arm to force overtime.

The Canucks will play their last home game of the season on Tuesday when they host the San Jose Sharks.

The Stars will face the Philadelphia Flyers in Dallas the same night.