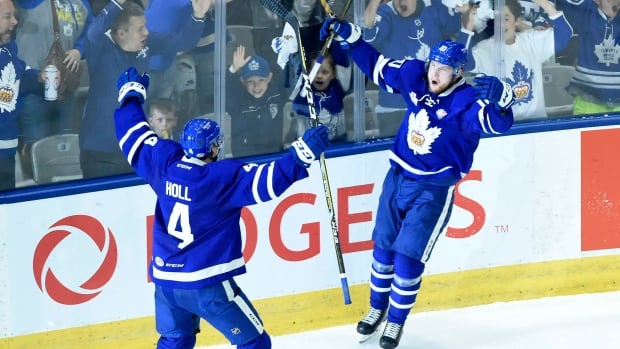 Andreas Johnsson scored two goals and added an assist as the Toronto Marlies beat the Texas Stars 6-1 on Thursday night to win the Calder Cup final in seven games.

Mason Marchment also had a pair for the hometown Marlies while Carl Grundstrom and Ben Smith added singles.

The victory capped a dream season for the top development team of the NHL’s Toronto Maple Leafs.

The Marlies led the American Hockey League with 112 points in the regular season and continued their strong play in the post-season, winning 10 straight games at one point before being pushed the distance by the Stars.

It’s the first Calder Cup title for the franchise since it moved to Toronto from St. John’s for the 2005-06 season. The last Toronto AHL affiliate to win the Calder Cup was the New Brunswick Hawks in 1982.

The teams alternated wins in the 2-3-2 series after Toronto took Game 1. The Marlies entered the decisive game with only a slight 19-18 edge in total goals.

Game 7 — the first in an AHL final since 2003 — offered a wide-open style as both teams used freewheeling attacks to generate chances.

Sparks was back in net for the Marlies after being pulled early in the third period of Game 6. He caught an early break as Sheldon Dries snapped a puck off the post just a few minutes into the game.

Johnsson converted a pass from Grundstrom at 10:35 to get the all-important first goal. It was his team-leading ninth goal of the playoffs and league-leading 22nd point.

Marchment made it 2-0 with 17.2 seconds left in the period. He was left open in the slot and wired a shot past Stars goalie Mike McKenna after a slick pass by Trevor Moore.

McKenna did well to keep it a two-goal game. Toronto outshot Texas 19-7 in the opening period.

The Stars came close to halving the deficit midway through the second period.

Texas forward Matt Mangene chipped the puck inside the post as Sparks was sprawled in the crease. Toronto defenceman Calle Rosen slid across and used his leg to help prevent the puck from crossing the line.

The referees put the whistles away for the decisive game. The first penalty came at 18:39 of the second period when Stars blue-liner Dillon Heatherington was called for interference.

Toronto came out charging in the third period and was rewarded at 3:35 as Grundstrom one-timed a pass from Johnsson.

The goal sent the towel-waving standing-room only crowd at Ricoh Coliseum into a frenzy. Chants of “We Want the Cup” soon followed.

A slashing penalty to Miro Aaltonen at 5:51 gave Texas its first power play of the game. However, the Marlies had the best scoring chance as Johnsson broke in shorthanded but was denied by a McKenna pokecheck.

Fyten was given credit for the Texas goal after a scramble in front. Sparks lost his glove — appearing to cut his finger during the commotion — but extended his pad to seemingly keep the puck out.

The officials went to video review and ruled it was a goal at 11:01.

Johnsson scored his second goal at 16:14 to restore Toronto’s three-goal cushion and Smith iced it with an empty-netter at 17:50.

Marchment added another goal with 54 seconds left and the party was on.