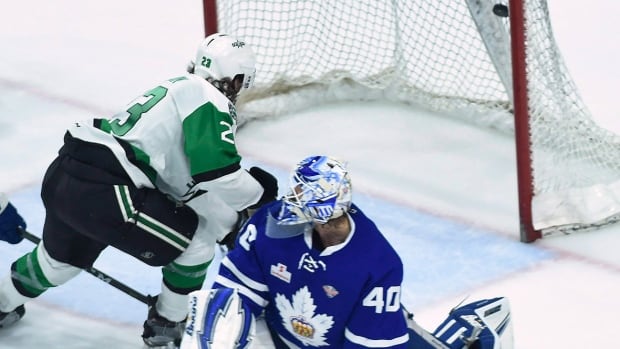 ​The Toronto Marlies plan to stick with goaltender Garret Sparks for Thursday’s decisive Game 7 of the Calder Cup final (7 p.m. ET) against the Texas Stars.

Sparks had a rare off-game in a 5-2 loss in Game 6 on Tuesday and was pulled early in the third period.

​Head coach Sheldon Keefe said the Marlies will lean on Sparks once again like they have throughout the regular season and playoffs.

“Sparksy, most importantly, will just lean on the routine that he’s established for himself to get himself right,” Keefe said. “I’ve got no concerns there whatsoever.”

The Marlies didn’t do their netminder many favours as turnovers and giveaways helped the Stars pull away in the second period.

Sparks was certainly not his usual self in net but Toronto played a choppy game in front of him despite a dominant — yet scoreless — first period.

Texas goalie Mike McKenna, meanwhile, was in top form as his team earned the road win to force a winner-take-all showdown at Ricoh Coliseum.

‘We’re going to bring our best’

“One game for a championship and we’re going to bring our best on Thursday night.”

Curtis McKenzie (21 points) and Justin Dowling (17 points) have led the Texas attack. The Stars were outshot 45-24 in Game 6 and didn’t manage much offence.

However, when the Stars were given opportunities, they took advantage. Toronto backup goalie Calvin Pickard stopped all six shots he faced.

Texas iced the win with an empty-netter.

“We’re a resilient team and I like our odds in Game 7,” Sparks said after the loss.

Both Sparks and McKenna enter the final game with identical 2.29 goals-against averages in the playoffs with two shutouts apiece.

“He’s been lights out,” McKenzie said. “He went on a run last year and he’s brought that to these playoffs. He has the same mentality and he’s been our MVP for sure.”

Toronto has not won a Calder Cup since the franchise moved to the Ontario capital over a decade ago. The St. John’s Maple Leafs were renamed the Toronto Marlies for the 2005-06 season.

The Stars last won the league championship in 2014.