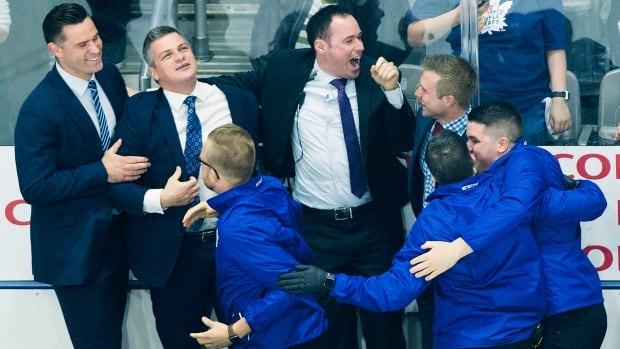 All he wanted was to celebrate his team’s accomplishment before having to think about his own career.

“I’m gonna party my [butt] off tonight and not think about anything else beyond that,” Keefe said on Thursday after his Marlies downed the visiting Texas Stars 6-1 in Game 7 of the American Hockey League championship series.

Leading a team to an AHL title historically has boded well for a coach’s future if the plan is to jump to the NHL, whether it be an assistant’s role or head coach.

Including Bill Barber, who won a Calder Cup in 1998 and was named head coach with the Philadelphia Flyers in 2000, 13 of the past 19 Calder Cup-winning head coaches before Keefe went on to become an NHL head coach.

If you add in Minnesota’s Bob Woods and Todd Nelson, who was recently hired by the Dallas Stars as an assistant coach after winning the 2017 Calder Cup, it jumps to 15 coaches to receive an NHL gig shortly after winning an AHL championship.

Toronto Maple Leafs general manager Kyle Dubas, who hired Keefe to coach the Marlies in 2015 after solidifying a relationship together with the Ontario Hockey League’s Sault Ste. Marie Greyhounds, knows his 37-year-old bench boss could be in demand this off-season after bringing Toronto its first Calder Cup.

“I’m very happy for Sheldon, I think he’s a very talented coach, continues to get better and it’s a very gratifying experience to see the continued development on his part,” said Dubas ahead of the Calder Cup final.

“I know his future is very, very bright.”

Stanley Cup champion Barry Trotz has an AHL championship from 1994. Nashville’s Peter Laviolette won one in 1999 and Edmonton’s Todd McLellan put his name on the Calder Cup in 2003.

Tampa Bay’s Jon Cooper is one of nine current NHL head coaches with a Calder Cup championship on their resume.

He led the Norfolk Admirals in a four-game sweep over the Marlies in 2012 to win the Calder Cup and was eventually promoted from within the Lightning organization. Toronto was coached then by Dallas Eakins, who also got an NHL shot with the Edmonton Oilers.

“I think it’s hard to say one way or another how you get a chance at the NHL level,” said Eakins, who now coaches the AHL’s San Diego Gulls.

“I’m not sure there’s a clear path but one thing I know for sure is winning never hurts.”

Keefe, from Brampton, Ont., was brought into the organization the same off-season Toronto president Brendan Shanahan hired Mike Babcock to an eight-year contract to coach the Leafs.

The New York Islanders are the only current NHL team with a head coaching vacancy after recently-hired general manager Lou Lamoriello fired Doug Weight. Previously, Lamoriello was GM of the Leafs.