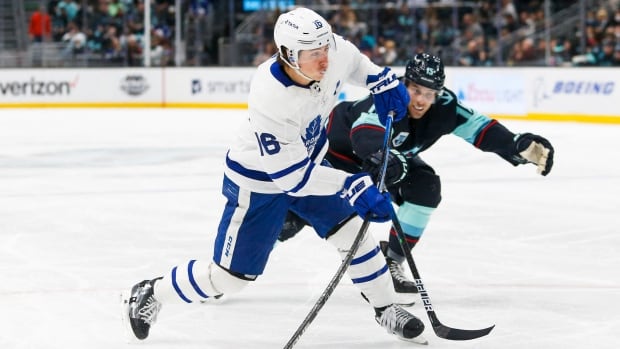 Mitch Marner scored once and added two assists, Michael Bunting had a goal and an assist, and the Toronto Maple Leafs snapped a two-game losing streak with a 6-2 win over the Seattle Kraken on Monday night.

Marner became the second player from the 2015 draft to reach 400 career points, joining Connor McDavid. It came on Marner’s 17th goal of the season that gave Toronto a 4-1 lead. He also assisted on Bunting’s power-play goal in the first period and helped on David Kampf’s short-handed goal early in the third period with a beautiful drop pass on a breakaway.

Marner had an eight-game points streak snapped in Calgary last week in Toronto’s first stop on a three-game trip, but has 22 points in the last 11 games. Auston Matthews added a pair of assists for Toronto, and Jack Campbell made 23 saves.

The Maple Leafs showed their potency on the power play going 2-for-2 with the man-advantage after entering the day with the best power play in the NHL, converting on 30.5% of their chances.

Ondrej Kase scored on the power play in the first period, redirecting Bunting’s shot past Seattle starting goalie Philipp Grubauer. Marner’s power-play goal came at 9:15 of the second period off a rebound.

Alexander Kerfoot opened the scoring for Toronto at 3:56 of the first period beating Grubauer up high on the blocker side after going the previous 12 games without a goal. Jake Muzzin capped the scoring with his second of the season at 18:19 of the third.

Grubauer stopped eight of 11 shots in the first period before being pulled, with some bad luck on Bunting’s goal as it deflected off Seattle defenseman Vince Dunn and caught Grubauer moving the opposite direction. Grubauer was replaced by backup Chris Driedger, who made 11 saves in the final two periods.