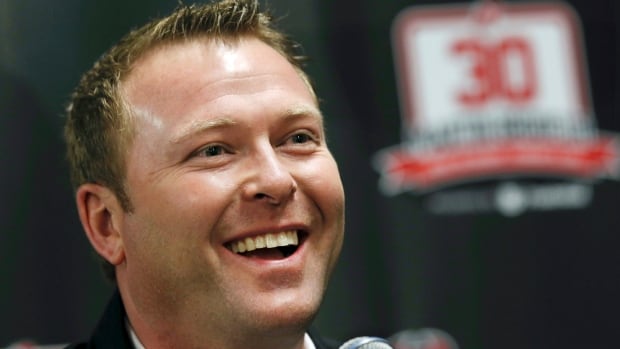 Martin Brodeur is back with the New Jersey Devils organization many hoped he’d never leave.

Brodeur rejoined the Devils on Wednesday as executive vice-president of business development, a shift from the hockey management job he held for three years as assistant general manager of the St. Louis Blues. He returns to the franchise he led to the Stanley Cup three times and became the NHL’s all-time-leading goaltender in victories.

“It feels fantastic to be back home here in New Jersey,” Brodeur said. “This unique opportunity will allow me to build on existing relationships in the business community and take on a new challenge in my career. I’ve been able to work in all facets of the game of hockey and have had a growing interest in the business surrounding the game.”

The 46-year-old will report to team president Hugh Weber and will work on business opportunities for the Devils, Prudential Center and the community.

Brodeur spent 21 of his 22 NHL seasons with New Jersey, lifting the Cup in 1995, 2000 and 2003 and winning the Vezina Trophy four times as the league’s best goalie. He signed with the Blues in December 2014 to continue his playing career and upon retirement moved into the front office, eventually becoming assistant GM to Doug Armstrong.

That combined with Hockey Canada roles in player personnel and management made it look like Brodeur was on track to become an NHL GM someday. This move puts his path in question, though Armstrong doesn’t believe it rules out Brodeur moving back to the hockey side.

“We wish Marty nothing but the best as he moves forward,” Armstrong said Tuesday when the Blues announced Brodeur’s departure . “When he does want to get back in the management role in hockey, his future will take him wherever he wants to go.”

No matter the job, Brodeur’s career has taken him back to New Jersey. Brodeur’s No. 30 is retired there, and a statue picturing him with his trademark salute stands outside the Devils’ arena.

Even though he won’t have a direct hand in the on-ice product, his homecoming is reason for celebration around the Devils.

“Today is a special day for everyone,” GM Ray Shero said. “We are all thrilled to have Marty back with the organization. I said last season that it was an exciting time to be a Devils fan and that’s especially true today. Welcome home, Marty!”