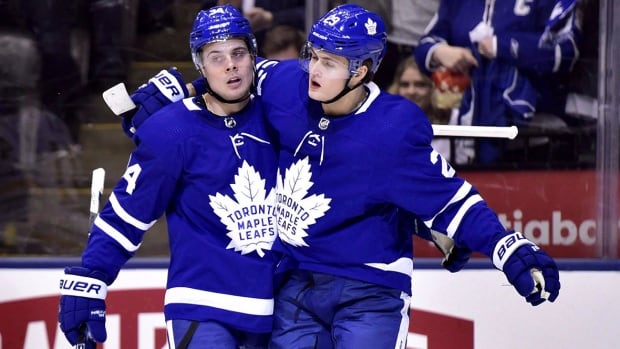 Mats Sundin isn’t surprised the Toronto Maple Leafs are asking their young stars to make a financial sacrifice to stay together.

The way the team’s former captain sees it, that’s simply the nature of the business.

“I think [it happens] in every negotiation for all players in the league,” Sundin said with a grin at an NHL Alumni Association event Monday night.

But the salary cap crunch the Leafs could face if Auston Matthews, Mitch Marner and William Nylander all max out their dollar value is no laughing matter.

In a somewhat unusual public declaration earlier this month, Leafs president Brendan Shanahan indicated the team would request that the talented forwards take less money on their next deals in order to fit everyone under the cap.

Nylander, a restricted free agent, is currently mired in a contract impasse that dragged through the summer, into training camp and is now approaching the 10-game mark of Toronto’s season.

The 22-year-old winger, who is coming off back-to-back 61-point campaigns, and the Leafs are reportedly as much as $2-million US apart on a long-term deal, with Nylander’s camp thought to be asking for around $8 million annually and Toronto countering in the $6-million range.

Matthews and Marner, both 21, can become restricted free agents next summer and are also in talks with the team on new contracts that, barring something unforeseen, will exceed whatever Nylander eventually gets.

“For Nylander and the Maple Leafs, you hope that the whole situation’s going to settle,” said Sundin, who played 13 seasons in Toronto. “[The Leafs] have a great, young group of players right now that are going to be able to compete and be one of the best teams in the league for a long time.

“Hopefully he can join the team and they can settle that.”

NHL Alumni Association executive director Glenn Healy said the comments made by Shanahan, who referenced that he and a number of star players with the Detroit Red Wings took less money to stay together during their championship years, needs to be put in proper context.

“I would say this: When Brendan played, there was no salary cap. So there was no taking less, you just took what you got, you took what the club budgeted,” said Healy, who played goalie in the NHL for 15 seasons. “It’s a different world now.

“We didn’t have a salary cap back then. We had, ‘Take what you were worth.”‘

And what advice would Healy give a player in Nylander’s position today?

Sundin, who now lives back home in Sweden with his wife and three children, was in Toronto for the NHL Alumni Association’s gala celebration where he was one of threes recipients of the Keith Magnuson Men of the Year Award along with countrymen Niklas Lidstrom and Borje Salming.

Now 47, Sundin said he’s been keeping a close eye on the Leafs, who started the season with big expectations after signing John Tavares in free agency.

Matthews is tied for the NHL lead with 16 points (10 goals, six assists) as the team rocketed out of the gate with a 6-1-0 record before consecutive losses brought Toronto back to earth ahead of Wednesday’s trip to Winnipeg to take on the Jets.

“It’s great as a former player and former captain for the fans and the city to have such a great, young team that are going to be great for a long time,” Sundin said. “I’m very excited to watch.”

Inducted into the Hockey Hall of Fame in 2012, Sundin played the first four of his 18 NHL seasons with the Nordiques and the second half of the 2008-09 campaign with the Canucks to finish out his career, but was best known for his time in Toronto.

His advice to this generation as their potential championship window opens is to enjoy the ride.

“If you’re playing for the Toronto Maple Leafs and you’re competing for a Stanley Cup, I wouldn’t want to be in any other city having that chance,” Sundin said. “The Toronto Maple Leafs is the team where you want to win. Just keep doing what they’re doing. They’re going to grow as a group and as players.

“They’re going to get lots of chances to compete for the Stanley Cup.”