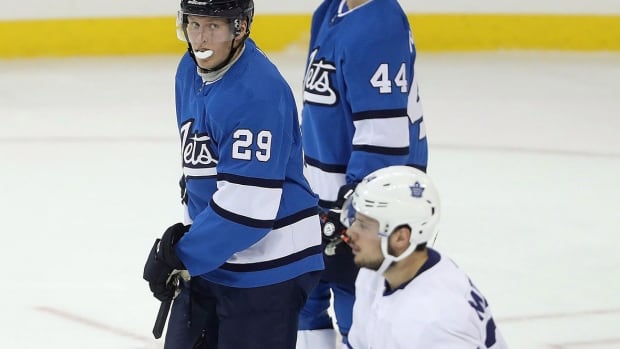 The beautiful thing about young studs like Auston Matthews and Patrik Laine is they’re surrounded by deep and talented teams. They don’t have the pressure to produce in every outing.

Despite his torrid start Matthews was held off the scoresheet for the third consecutive game, yet his Toronto Maple Leafs defeated the Winnipeg Jets 4-2 at Bell MTS Place on Wednesday.

The Maple Leafs third-year centre was still a force. With the Jets pressing in the opening 20 minutes, Matthews intercepted a pass that possibly could have resulted in a Winnipeg goal. His doggedness also helped set up Kasperi Kapanen’s unassisted ice-breaking goal late in the first period.

Laine, on the other hand, was less noticeable. Under some heat, because he has yet to score an even-strength goal, Laine began the game with new linemates in Mark Scheifele and Blake Wheeler, but after the Jets found themselves down 3-0 after 40 minutes, he was back with his regular centre Bryan Little for the final period.

Laine hit the crossbar in the final minute of the first period, but had four long-range shots on goal, three misses and two blocked. He failed to dump the puck out of his end, a miscue that led to Kapanen’s goal. A shift later he took a slashing penalty on Matthews.

Nazem Kadri’s first of the season was enough to hold off Winnipeg in Toronto’s 4-2 win. 1:39

Laine, however, will have another chance at Matthews and the Maple Leafs when the two best Canadian-based teams clash again in Toronto on Saturday.

Matthews and Laine will forever be tethered as the first- and second-overall selections, respectively, in the 2016 draft. They’re both off to fantastic careers. Matthews has 84 goals in 154 regular-season games, one better than Laine’s total in 165 games. Only Alex Ovechkin has scored more in the last two-plus seasons with 90 in 172 games.

In the latest game between the young studs, the Maple Leafs needed the win more than the Jets. Toronto had lost back-to-back home games against the Pittsburgh Penguins and St. Louis Blues, scoring only once in the two outings.

The two-game losing streak didn’t wipe out Toronto’s fantastic start, but the offensive-oriented club did not need two more days of hand-wringing before their next game on Saturday.

The Jets, meanwhile, scored an impressive come-from-behind 5-4 overtime win at home against the Blues on Monday, a game that saw Winnipeg scored four times in the third period. The win extended the Jets regular-season home upbeat streak to 14-0-1, dating back to March. 2.

But that impressive run at home came to end as the Maple Leafs notched their fifth win on the road in five starts. Toronto’s 7-3-0 record overall for 14 points after 10-games is slightly better than the Jets (6-3-1) 13-point start.

The Maple Leafs were in top gear once again. They had their speed game and outworked the Jets in the Winnipeg end of the rink.

The Jets, described as a heavy team in the trendy lexicon of hockey these days, are a club built for the playoffs. They did not, however, play a heavy, physical game.

Maybe they were afraid of taking too many penalties. Toronto’s power play has gone 9-for-25 for a 36 per cent success rate. Only Ovechkin and the Capitals have been better at 38.7 per cent (12-for-31).

On the Maple Leafs side, this game belonged to newcomer John Tavares and Mitch Marner. They combined for a key Tavares goal in the third period after Winnipeg had closed the gap to 3-2.

On the Jets side, it was a slump-busting game for speedy Nikolaj Ehlers. He checked in with 29 goals last season but failed to score a goal in the final two regular-season games last year, any of the 15 playoff games last spring and the first nine to open the season this fall for a 26-game drought. He not only scored against the Maple Leafs but led his team with eight shots on goal.

All of this made for an intriguing game on Wednesday and we can hardly wait for the rematch on Saturday.