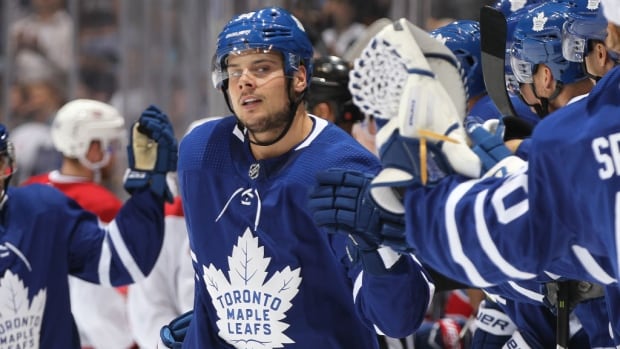 Auston Matthews scored his second goal of the night in overtime as the Toronto Maple Leafs beat the Montreal Canadiens 3-2 on Monday in the NHL’s regular-season opener.

Artturi Lehkonen and Andrew Shaw scored for Montreal, which got 23 saves from Price. Max Domi — the son of former Leafs tough guy, Tie Domi — had two assists in his first game with the Canadiens.

With the Leafs viewed as legitimate Stanley Cup contenders after adding Tavares in free agency to a roster already loaded with offensive talent up front, the city has been buzzing for months at the prospect of Toronto finally ending its 51-year title drought.

The Canadiens, meanwhile, are loathe to use the word “rebuild,” but have clearly begun a transition phase following the trade of captain Max Pacioretty to the Vegas Golden Knights last month for Tomas Tatar, prospect Nick Suzuki and a 2019 second-round draft.

Despite the wide gulf in expectations, Montreal was the better team much of the night, and came close to taking a 3-2 lead on a third-period power play when Tatar hit the post.

Domi then had another chance on a bouncing puck that had Andersen desperately flailing in his crease.

While the Leafs were outshot 15-7 in the period, a down-and-out Price made an incredible pad stop on Kasperi Kapanen on a scramble just before the buzzer to end regulation.

After the teams traded goals in the first, they did the same late in the second.

Tavares — who signed a US$77-million, seven-year deal on July 1 with the team he cheered for growing up in nearby Oakville, Ont., after nine seasons with the New York Islanders — moved past Matthew Peca and roofed a shot over Price at 18:07.

But the Canadiens got a late power play and levelled things when Shaw beat Andersen upstairs with 12.3 seconds left on the clock. Shaw was playing his first game in nearly seven months after suffering a knee injury March 13.

Montreal rookie Jesperi Kotkaniemi, the first player born in the 2000s, picked up an assist. The Finn, who only turned 18 in July, also became the second-youngest player in Canadiens’ history to score a point.

Prior to the late flurry, the teams traded chances in what was at times a sluggish battle through the neutral zone.

Andersen, who set a franchise record for wins last season with 38, made a good pad stop on Brendan Gallagher early in the second before Price matched that save with a lunging effort at the other end on Marleau.

Tatar then rattled Andersen’s mask with a backhand and Paul Byron hit the post for Montreal moments later.

Price was there again with 2:34 remaining when he blocked Josh Leivo’s effort on a 2-on-1, but the Toronto winger will be disappointed in his shot that hit Price square.

Montreal had Toronto on its heels early, outshooting the hosts 6-1 before Lehkonen scored the first goal of the NHL season when he banked a wraparound off Leafs defenceman Ron Hainsey at 9:34.

Toronto picked things up almost immediately and had a couple of good opportunities before their top-heavy first power-play unit went to work. Matthews took a feed from Morgan Rielly at the left faceoff dot and used a subtle toe drag to change the angle before whipping a shot beyond Price’s glove at 12:57.

The Canadiens goalie stared at the replay on the big screen high above centre ice at a raucous Scotiabank Arena — formerly Air Canada Centre — as the Leafs celebrated, perhaps trying to get his first look at the bullet shot.

The move ended Alzner’s consecutive-games streak of 622, the fourth-most among active players. Plekanec, meanwhile, has played at 998 career games, meaning he will have to wait a little longer to reach 1,000.