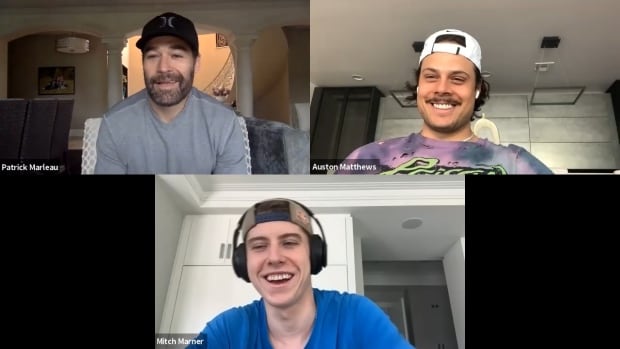 Auston Matthews remembers returning to the Toronto Maple Leafs’ hotel after dinner one night and finding something unexpected.

It was a road trip early in the 2017-18 season, and when the door to his room swung open, there was fellow second-year pro Mitch Marner sitting on the bed with newly signed, then-38-year-old winger Patrick Marleau.

“[They were] waiting for me and we were going to watch a movie … we put on Cars 3,” Matthews recalled with a smile. “That was a tradition every road trip — put on a movie and order dessert.”

At one point Matthews playfully scolded Marner for the noise on his end of the call: “Mitch, please.”

While things were kept mostly light by a member of the NHL’s public relations staff leading the call — independent reporters submitted questions beforehand — the bond forged by the three as teammates after Marleau signed with the Leafs in free agency in July 2017 following 19 seasons with the San Jose Sharks was evident once again.

“They seemed like really good, young guys,” Marleau said. “Just took a liking to them.”

With time on their hands, the trio reflected on how, despite an age gap of nearly two decades, the friendship and chemistry flourished.

Marleau followed up by inviting Matthews and Marner, both 20 at the time, for a meal with his wife Christina and the couple’s four boys at their home in Toronto. That soon turned into frequent visits, pictures, singalongs and games of mini-sticks where an Apple watch or two was sacrificed.

“Every time we went after [the first trip] we brought an extra pair of clothes,” Marner said. “We knew we’re gonna get all sweaty play mini-sticks for hours. That’s kind of just where the relationship started — when we started going over there and hanging out with all the kids, just kind of feeling like we were a part of the family.”

Marleau scored 27 goals and 47 points in his first campaign with Toronto, and added four goals and an assist in a seven-game playoff loss to the Boston Bruins that spring.

“I knew they were really highly skilled and played that up-tempo, offensive game,” the veteran winger said of Matthews and Marner. “They make everybody around them better. That was one of the things that appealed to me.”

Marner said signing Marleau to his three-year, $18.75-million US contract sent a strong message to a young Toronto core coming off just its second post-season appearance since the 2004-05 lockout.

“It gave us the confidence that we’re bringing in a guy that can do everything our team needed,” said the winger, now 22. “Everyone knew what his resume was, how long he’s been in the league. As soon as he started speaking everyone listened.

“We’re both very grateful to have played with him.”

But time catches up to everyone.

Marleau regressed to 37 points in 2018-19, his lowest total in a full season since 1997-98 as a rookie, and just two assists in another playoff loss to the Bruins.

With the Leafs in a salary cap crunch last summer — coincidentally, Marner’s need for a new contract played a huge factor — Marleau was traded to Carolina in a cost-cutting measure. The Hurricanes couldn’t convince the soon-to-be-40-year-old to play for them, so he was bought out before signing back with the Sharks for one season.

San Jose then dealt Marleau to the Pittsburgh Penguins, who beat the Sharks for the Stanley Cup in 2016, at the NHL trade deadline.

Eight games later, the coronavirus brought life on and off the ice to a screeching halt.

“The short amount of time I spent there was great,” Marleau said from his home in San Jose. “Just a great opportunity for myself to get another shot at winning a Cup.”

Whether that shot actually happens this season is anyone’s guess. NHL players have been self-quarantined since the middle of March — a directive recently pushed back until at least April 15 and likely to be extended further.

The league could return later this spring, in the summer or perhaps not until 2020-21.

Matthews, who’s spending the pause in Phoenix with Leafs goalie Frederik Andersen and was on pace to become just the fourth different Toronto player to score 50 goals in a season, said Marleau’s influence on both he and Marner came early and often.

“If I ever need something or want to bounce something off somebody, he’s a guy that has been through a lot,” Matthews said. “He’s always going to give honest feedback and his opinion.”

Maybe over a movie and dessert.