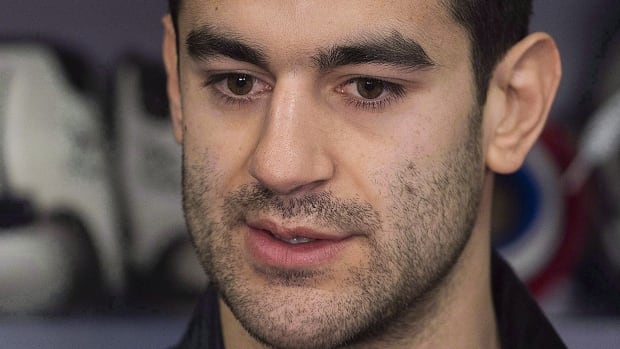 When Max Pacioretty told his kids he had been traded from the Montreal Canadiens, one of his three sons pointed to his bedsheets covered in NHL team logos and asked which one was Vegas.

Problem is, the sheets were pre-Golden Knights. Instead, he showed his sons a YouTube video of the team’s pregame extravaganza during the playoffs. They quickly became excited, and they weren’t the only ones.

“When we came here and we played them … it was one of the most amazing hockey experiences in my life,” Pacioretty said Wednesday at his introductory news conference. “I’m really looking forward to it. It’s a first-class organization that I’m proud to be a part of.”

The 29-year-old Pacioretty, who was traded Sunday and immediately signed to a $28 million US, four-year contract extension that runs through the 2022-23 season, said coach Gerard Gallant and general manager George McPhee made it clear he was being brought into an organization that is ready to compete for a Stanley Cup again.

Add in the research he did about the community, his familiarity with Gallant, who was an assistant in Montreal in 2012, and the success of the team in its inaugural season, and the all-star felt it was a good time to relocate.

“I feel I have the opportunity right now to just get back to what I loved doing as a kid, and that’s just going out there and having fun and playing hockey,” Pacioretty said. “They play a fast game, they’re all on the same page every single night and they play for each other. They mentioned that there’s going to be 23 captains on the team this year, and I could feel that today with the energy in the room and the camaraderie of the guys. I’m just excited to be a part of that.”

Pacioretty, who had 17 goals and 20 assists last season with Montreal, said he is also excited to be reunited with veteran centre Paul Stastny, whom the Knights signed earlier this year. The Pacioretty-Stastny tandem will be familiar to fans of past versions of the U.S. men’s national hockey team and could prove to be an upgrade to a second line that lost James Neal and David Perron in free agency.

Who won the trade?

“Every time we play for Team USA, we are linemates. Our wives are friends, our parents are friends, we’re friends, we do have chemistry,” Pacioretty said. “He’s a very reliable centre who takes care of his end, slows down the game, more of a give-and-go player, that’s why I like playing with him a lot.

“Just to come in and know that you have previous chemistry with another player and that that’s always an option is a comforting feeling. And also knowing that we’re going through the process of being new players in an organization together is another comforting feeling.”

Forward Reilly Smith, who ranked fourth on the team with 60 points last season, said the addition of someone with Pacioretty’s resume can benefit each player individually, bringing out the best in everyone.

“It’s always nice to bolster your lineup a little bit,” Smith said. “He’s a gifted goal-scorer, he’s able to move up and down the ice with anybody else in the league. It’ll be exciting to add his speed, it’ll help quicken up the pace. I think we like playing a fast style and his game suits that.”

While Pacioretty said he enjoyed his tenure with the Canadiens and is thankful for the career and relationships he established while in Montreal, he said he is ready for change.

“If I had got taken by Vegas in the expansion draft, I wouldn’t be feeling the way I am today,” Pacioretty said. “Everyone had a lot of question marks about what this franchise was going to be like. Nobody knew this was going to turn into a hockey town. I’m very excited to be in Vegas, this is a new chapter of my life. I’m ready to be a part of something that they’re building here in Vegas that’s very special, so I’m very honoured to be here.”