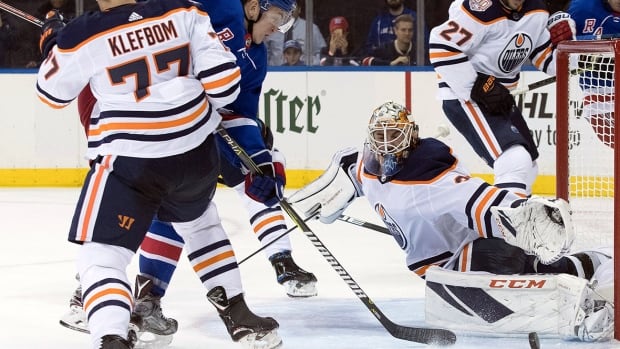 Edmonton captain Connor McDavid scored the go-ahead goal on the power play and added an assist, lifting the Oilers past New York 2-1 for their first win of the season.

McDavid scored his second of the season at 6:23 of the third period, redirecting the puck past goaltender Henrik Lundqvist with Rangers forward Vladislav Namesnikov in the penalty box for holding. Leon Draisaitl and Ryan Nugent-Hopkins had assists.

The 21-year-old McDavid, who has led the league in points each of the past two seasons, has points on all five Oilers goals in three games this season. He is one of 11 first-round picks on the Edmonton roster. McDavid was the first overall selection by the Oilers in 2015.

The Oilers lost their season opener 5-2 against the New Jersey Devils in Sweden before dropping their next game 4-1 on Thursday at Boston.

Mika Zibanejad opened the scoring for the Rangers at 12:49 of the first period. The fleet Zibanejad took a pass from defenceman Marc Staal and put the puck past the former Ranger Talbot. Defenceman Brendan Smith also assisted on Zibanejad’s first goal this season.

Zibanejad also twice rang shots off posts behind Talbot, Lundqvist’s backup for two seasons with the Rangers. Talbot helped New York reach the Stanley Cup Final in 2013-14 where they lost in five games to the Los Angeles Kings.

Nugent-Hopkins tied the contest at 14:17, tapping a rebound past Lundqvist for his first this season. Defenceman Darnell Nurse, playing his 200th NHL game, and McDavid assisted.

The Rangers came out with purpose for the matinee against the winless Oilers. The home team was coming off their first win of the season, a 3-2 overtime victory over San Jose on Thursday after they had lost their first three contests under new coach David Quinn.

New York had a 10-7 shots advantage in the first period. The teams played a scoreless second in which the Oilers outshot the Rangers 9-6.

The Rangers had won each of their last five games against the Oilers, dating back to Dec. 15, 2015.