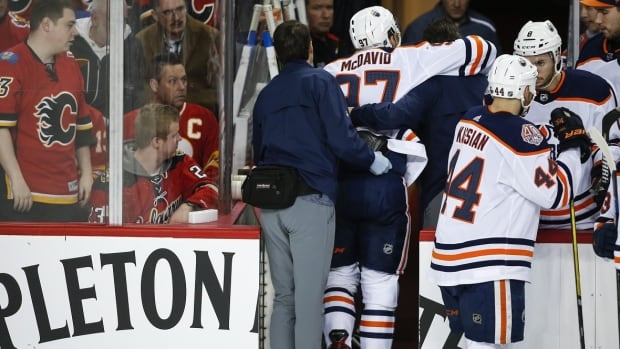 Oilers captain Connor McDavid said he seems to be OK following a scary leg injury in Edmonton’s season finale against the Calgary Flames on Saturday night.

McDavid left Edmonton’s 3-1 victory over Calgary with a left leg injury after crashing into the Flames net in the second period. It appeared to be a serious injury, but the X-rays were negative and McDavid was scheduled to undergo an MRI Sunday.

“We still don’t know too much. Things look fairly positive right now but we haven’t had a picture in there so we’ll see,” McDavid said Sunday.

Connor McDavid flew into the post at high speed, slamming his leg and requiring the trainer’s assistance to get off the ice as the Oilers played their final game of the season. 3:24

McDavid was helped off the ice by teammate Zack Kassian and a trainer — putting no weight on his leg — after crashing into the Flames’ net early in the second period. He fell to the ice after being challenged by Flames defenceman Mark Giordano and then slid hard into the net. Giordano was penalized for tripping.