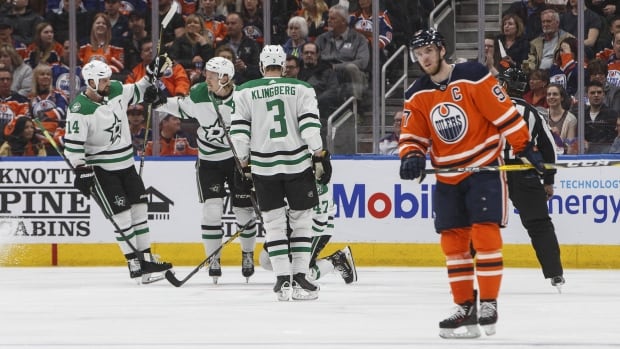 Jamie Benn scored the shootout winner as the Dallas Stars beat the Edmonton Oilers 3-2 on Thursday.

Alexander Radulov and Miro Heiskanen scored in regulation for the surging Stars (41-31-6), who further cemented their hold on the Western Conference’s first wild-card playoff spot with their third consecutive win.

Leon Draisaitl and Connor McDavid responded for the Oilers (34-34-9), who have lost four of their last six games and are all but eliminated from playoff contention.

Edmonton got on the board first five minutes into the opening period just as a power play expired when McDavid sent it across to Draisaitl, who beat Stars goalie Anton Khudobin for his 47th goal of the season.

Draisaitl also picked up his 100th point of the season with the goal, joining McDavid in triple digits this season to become the first Oilers duo to crack 100 points since 1988-1989 (Jari Kurri and Jimmy Carson).

It is also the first time in the NHL since 2010 that a pair of teammates achieved the feat, when it was accomplished by Alex Ovechkin and Nicklas Backstrom of the Washington Capitals.

The Oilers added to their lead just over a minute into the second on an highlight-reel goal by McDavid.

The goal was McDavid’s 40th of the season, making him the first Oiler to record back-to-back 40-goal campaigns since Kurri in 1989.

Dallas got one back on the power play six minutes into the first when Radulov beat Oilers goalie Mikko Koskinen high to the glove side with a one-timer.

The Stars tied the game eight minutes into the third period when Heiskanen scored on a shot through a screen to make it 2-2.

Both teams are back in action on Saturday night. The Stars travel to Vancouver to face the Canucks and the Oilers close out a five-game homestand against the Anaheim Ducks.