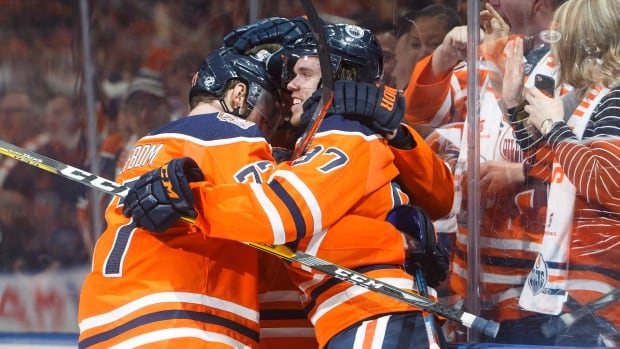 Connor McDavid set up Leon Draisaitl​ for the overtime winner as the Edmonton Oilers defeated the Boston Bruins 3-2 in their home opener on Thursday.

Kailer Yamamoto and Ryan Nugent-Hopkins also scored for the Oilers (3-2-0), who have won three straight.

David Krejci and David Pastrnak responded for the Bruins (4-2-1), who have dropped two in a row.

Boston had the best chances in the scoreless first period as David Krejci hit a crossbar in the early running before a flurry on shots in the dying seconds on Oilers goalie Cam Talbot, with defender Darnell Nurse batting a puck out of the air that was heading into the net. The Bruins outshot Edmonton 12-5 in the first.

The first goal didn’t come until past the midway through the second when the Bruins got on the board following an Edmonton giveaway, with Krejci left alone at the side of the net to record his first goal of the season.

The Oilers tied the game back up a couple minutes later when rookie forward Yamamoto beat Boston goalie Jaroslav Halak up high for his first career NHL goal.