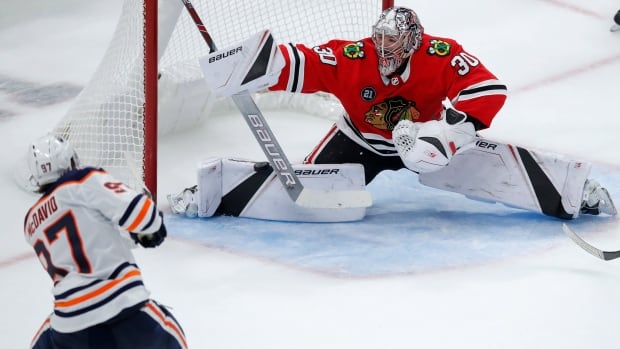 Connor McDavid scored 53 seconds into overtime to lift the Edmonton Oilers to their third straight win, a 2-1 decision over the Chicago Blackhawks on Sunday.

After two Blackhawks skaters got caught deep in their zone, McDavid finished a 2-on-1 break, taking a cross-ice feed from Leon Draisaitl and beating Cam Ward from the left circle for his eighth goal.

Chicago’s leading scorer, Patrick Kane, assisted on Seabrook’s goal to extend his point streak to six games. Kane, who entered with an NHL-leading 11 goals, has been held without a point only once in 12 games.

McDavid has recorded a point in nine of 10 games.

Cam Talbot stopped 31 shots as Edmonton improved to 3-1 in overtime games. Chicago is 3-3 in contests that go beyond regulation.

Ward made 24 saves as the Blackhawks rebounded with a tighter defensive effort following a 7-3 loss at St. Louis on Saturday.

The Oilers and Blackhawks play again at Edmonton on Thursday in their second of three meetings this season.

Seabrook opened the scoring at 11:02 of the first period, completing a give-and-go with Kane during a 5-on-3 power-play for his second goal this season.

Seabrook passed from the blue line to Kane in the right circle. Seabrook then slipped through the slot, took Kane’s return feed and beat Talbot high on the glove side.

Kassian’s first goal tied it 1-all with 1:34 left in the period to cap a flurry around the Chicago net following a faceoff. Ward made pad save on Darnell Nurse’s shot from the point, and then Jujhar Khaira flipped the rebound off the crossbar.

Kassian corralled the loose puck at the right side of the net and scooped it in with Ward sprawled on the ice.

Talbot stopped Nick Schmaltz on a breakaway 3:22 into the period and Marcus Kruger close in with 2:20 left. Ward was tested a couple of times and got lucky when McDavid’s shot from the right circle hit the post midway through the second.

Tobias Rieder shot wide on a short-handed 2-on-1 break midway through the scoreless third. Talbot stopped Erik Gustafsson from the slot with 17 seconds left in regulation.