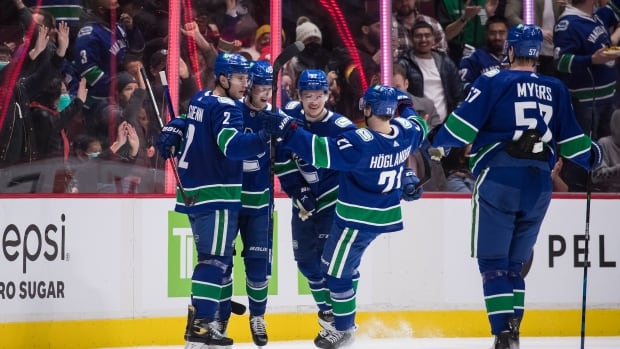 J.T. Miller marked a major milestone in spectacular fashion Tuesday, notching a goal and an assist as the Vancouver Canucks cruised to a 5-1 victory over the Arizona Coyotes.

The Canucks’ leading scorer collected his 400th career point as Vancouver improved to 21-20-6 on the season in its return from the all-star break.

Elias Pettersson and Bo Horvat each added a goal and an assist for the home side, while Conor Garland and Brock Boeser also scored and defenceman Oliver Ekman-Larsson notched three assists in his first game against his former team.

The Canucks once again got all-star goaltending from Thatcher Demko, who made 35 saves. Karel Vejmelka stopped 24-of-29 shots for the Coyotes.

Tuesday marked the return of Arizona’s Antoine Roussel and Loui Eriksson to Vancouver. The duo were part of a blockbuster trade in July that saw the Canucks send three forwards and a ream of draft picks to the Coyotes in exchange for winger Garland and Ekman-Larsson.

Roussel and Eriksson were recognized on the big screen midway through the first period, drawing a mix of cheers and boos from the crowd.

Boeser capped the scoring with a power-play marker 11:25 into the third period after Ilya Lyubushkin was called for slashing against Miller.

The right-winger deflected in Pettersson’s shot for his 13th goal of the year.

The Canucks were 2 for 3 on the power play Tuesday, while the Coyotes went scoreless on four chances.

Vancouver (69.9 per cent) and Arizona (73 per cent) came into the game with the two worst penalty kills in the league.

Earlier in the third, Miller picked up the puck deep in Vancouver territory and deftly skated the length of the ice, evading Arizona defenders all the way, and wrapped a shot around Vejmelka’s outstretched leg to put the Canucks up 4-1.

It was the veteran forward’s 16th goal and 46th point of the season.

The Coyotes cut into the home side’s lead 13:31 into the second period, with Crouse sending a backhanded shot in behind Demko from the side of the net.

Vancouver took control of the game early in the second, erupting with three goals in two minutes and 22 seconds.

Garland found the back of the net first, collecting a slick pass from Noah Juulsen and dropping to one knee before unleashing a rocket at the 3:48 mark for his 11th goal of the season.

Juulsen was credited with an assist, his first-ever point for the Canucks. He added a second in third, helping out on Miller’s goal.

Moments after Garland’s goal, Vancouver got a man advantage as Phil Kessel was sent to the box for slashing Juho Lammikko.

The Canucks were quick to capitalize, with Ekman-Larsson firing a shot from the blue line and Horvat deflecting it in from the front of the net to put his team up 2-0.

Vasily Podkolzin set up the third goal of the night, slicing a slick pass to an unmarked Pettersson. The Swedish centre sprinted towards the net and blasted a wrist shot over Vejmelka’s glove from the hash marks 6:10 into the middle frame.

The Canucks continue a three-game homestand Wednesday when they host the New York Islanders. The Coyotes are set to visit the Kraken in Seattle the same night.