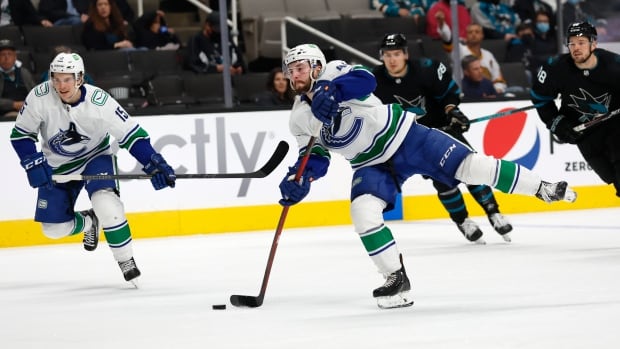 J.T. Miller scored with 2:21 remaining in overtime after Vancouver allowed a tying goal in the final second of regulation, giving the Canucks a 5-4 victory over the San Jose Sharks on Thursday night.

Vancouver appeared set to win it in regulation when Conor Garland scored with 5:37 remaining and then the Canucks cleared the puck out of their own zone with less than 10 seconds to go.

But the Sharks made one last rush and Alexander Barabanov tied it with 0.6 seconds remaining, forcing Vancouver into overtime.

Miller then ended it when he beat James Reimer from the top circle on a delayed penalty to give the Canucks their third win in four games.

The Canucks thoroughly dominated the first period, outshooting the Sharks 15-4 and scoring twice in the final 5:06.

The first came when Miller slid a slick pass to Boeser, who beat Reimer up high from in close for his 15th goal of the season. That gave Boeser his third goal in two games against San Jose this season.

Vancouver added on late in the period when Jake Middleton sent a clearing attempt right to Hughes, whose knuckling shot from the point bounced off the ice and beat Reimer.

The Sharks found their game in the second period and got back into it thanks to a fortunate bounce. Couture’s centering pass knocked off defenseman Tyler Myers’ stick and into the net for the first goal.

Then after Podkolzin restored the two-goal lead for Vancouver, Meier beat Demko from the circle on the power play to make it 3-2 headed to the third.

Meier then added his 23rd of the season and second of the game on the power play 45 seconds into the third off a good pass from Tomas Hertl to tie the game.