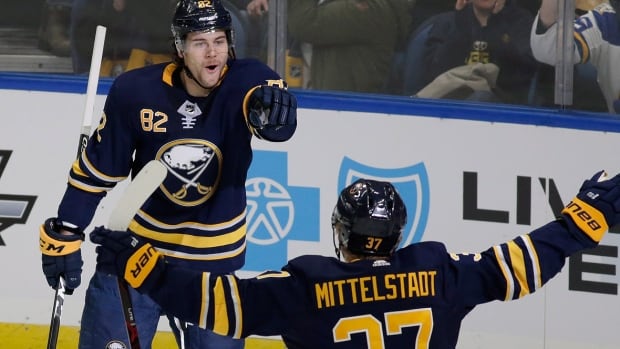 Jeff Skinner and Sam Reinhart rallied Buffalo with goals late in the third period, Jack Eichel and Casey Mittelstadt scored in the shootout and the hometown Sabres beat the Vancouver Canucks 4-3 on Saturday.

With goalie Carter Hutton pulled for an extra attacker, Skinner got Buffalo within 3-2 with 2:27 left in the third, and Reinhart tied it 40 seconds later. Nathan Beaulieu also scored, and Rasmus Ristolainen and Rasmus Dahlin each had two assists in the Sabres’ second straight overtime win.
Carter Hutton made 36 saves and stopped two shots in the shootout, including a final denial moments after Mittelstadt’s go-ahead score.

Loui Eriksson had a goal and an assist for the Canucks, who are 4-0-2 in their last six games. Jake Virtanen and Erik Gudbranson also scored, Antoine Roussel had two assists and Jacob Markstrom stopped 34 shots in the third leg of a six-game trip.

As the clock ticked down in the third, Reinhart set up Skinner for his team-leading 12th goal, then tied it when he put back a rebound from Ristolainen’s slap shot at the left edge of the crease.

Gudbranson gave the Canucks a 3-1 lead on a long shot from the point 3:41 into the third.[SIMIILAR]

The Canucks scored twice in a span of 1:10 late in the second period to take a 2-1 advantage. Markus Granlund sent a backhand pass from the end board to Eriksson in front for a tying goal with 1:44 remaining in the period. Virtanen skated around defenceman Zach Bogosian and slid a backhand from the right circle into the far corner for his seventh goal of the season to put Vancouver ahead.

Buffalo gained an early lead when Kyle Okposo threaded a long pass from the point to Beaulieu for a tap-in 4:43 into the first.

The Canucks were without Brock Boeser for a third straight game. Coach Travis Green said Boeser will miss the remaining three games of the team’s trip while he recovers from a groin injury. A Calder Trophy finalist last season, Boeser is listed as week-to-week but “will be fine,” Green said prior to Saturday’s game.