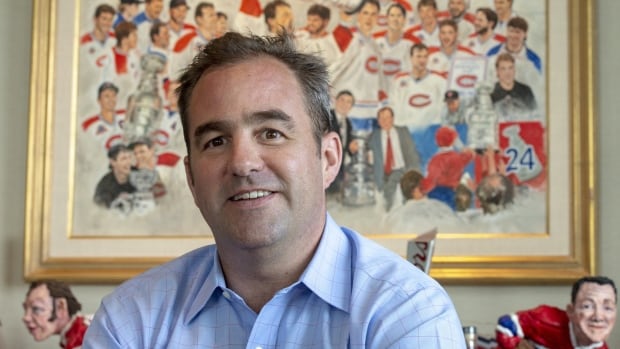 Geoff Molson fielded questions from all angles in French and English for 90 minutes Wednesday.

The topics lobbed at the Montreal Canadiens’ owner, president and chief executive officer by reporters ranged from his team’s performance, to the impact of the COVID-19 pandemic on business and social justice.

The patience he demonstrated in both official languages also clearly extends to the club’s front office.

Speaking publicly for the first time since the NHL was forced to pause the 2019-20 campaign in March because of the novel coronavirus pandemic, Molson said on a conference call that general manager Marc Bergevin continues to have his full support.

“We ran into some roadblocks,” Molson said of Montreal’s disappointing regular season. “I still believe that we have an extremely exciting next few years ahead of us.”

The Canadiens were on their way to missing the playoffs for the third straight spring — and fourth time in five years — before being handed a lifeline by the league’s return-to-play plan this summer.

Montreal earned the 24th of 24 spots despite registering just 71 points in 71 games, including a paltry 19 wins in regulation.

The Canadiens were agonizingly close to making the playoffs in 2018-19, a season described as the beginning of a “reset” by Molson, but were unable to recover from two separate eight-game losing streaks this campaign before it was put on ice.

“I believe that we have a great core group of veterans that are going to lead us through,” he said. “We have some young players that are already on the team that we know are going to contribute. We’ve got some prospects coming, that we are very hopeful on.

“The plan, overall, has been well executed, despite some performance issues that we had this season.”

Molson also shot down rumours the team will be hiring a president of hockey operations to fill a management level between himself and Bergevin, who made the playoffs in each of his first three season as GM, including a trip to the Eastern Conference final in 2014.

“Every year we learn something about each other,” Molson said. “Am I satisfied because we took a step back? Of course not. I’m not satisfied and Marc knows that. But I do know that we have a good plan. And I still believe that we’re going to get through this.”

Montreal has won the Stanley Cup a record 24 times, but its been 27 years since the city’s last title. Molson understands the frustration — he remembers some of the glory years long before he owned the team — but pointed out hockey’s landscape has drastically changed.

“Our commitment to winning has never slipped,” he said. “There is an enormous amount of parity in the league right now. We saw it last year in the playoffs, we see it every year in the playoffs. There is nobody in our organization that is lowering their standards, and we never will. It may be different now … 27 years is a long time for Montreal.

“It’s hard, and I want to get there, but the standards have never changed.”

Molson also touched on the difficult business side of the pandemic and was asked about the death of George Floyd — who was killed by a white Minneapolis police officer  — and the protests against racial injustice that followed.

The Canadiens released a statement in the wake of Floyd’s death, saying the organization was “horrified by the images of this despicable and heinous crime.”

And Molson said that if a member of the team chose to protest by taking a knee, like former NFL quarterback Colin Kaepernick, or raise a fist during the national anthems whenever the games resume, he would have the owner’s full support.

“The most important thing is that I believe [Black Lives Matter] is an important cause, and our organization will continue to do what it can do to support making it better for the next generation.”

As for the game itself, Molson said he’s confident the NHL will return this summer, which would see Montreal meet Pittsburgh in the best-of-five qualifying round for a shot at the regular 16-team playoffs.

“There’s so much uncertainty,” he said. “You can never be 100 per cent certain, but I feel really good about (the NHL’s) plan.”

Molson said the Canadiens’ practice facility will open for Phase 2 of the league’s return-to-play protocol — which includes small group workouts — on Monday for players in the Montreal area.

There’s still plenty to be negotiated between league and the NHLPA, but it’s hoped training camps can start sometime after July 10, with games following later that month or in early August in two hub cities.

And even though it was a tough season up to this point, Molson hopes his team can write an incredible story.

“Do I think that this is the team that’s built to win the Stanley Cup? I don’t think so,” he said. “But I do think that anything can happen in the playoffs. “We’ve seen it before.”