The Canadiens and Flyers are both chasing a wild-card spot in the Eastern Conference. Montreal entered three points behind Columbus for eighth place in the East and the Flyers were six points out with 78.

With less than 10 games left for each team, time has about run out for the Flyers to complete their desperate playoff push. The Canadiens, well, they have a playoff pulse after losing two straight and four of five overall.

Price was never seriously tested by a Flyers team that seemed listless in front of an empty Wells Fargo Center. The biggest cheers were reserved for the prizes awarded on fan appreciation night.

Gallagher scored his 31st goal on a slapper from the slot in the first for a 1-0 lead. Gallagher, who had his first NHL hat trick against the Flyers on Feb. 21, has done his part to keep the Flyers out of the playoff picture. He scored his fourth goal in three games against Philly and provided all the offence Price needed. 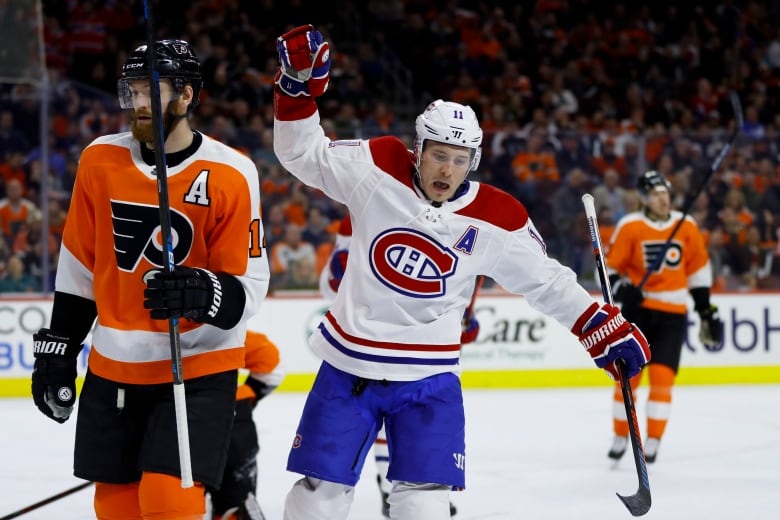 Weber turned a faceoff win into his 12th goal of the season in the second and the Canadiens again got the better of rookie goalie Carter Hart. Hart came off a sensational 41-save victory at Pittsburgh that kept Philly afloat for one more game.

But the odds are stacked against them — just a 2.6 per cent chance of making the post-season headed into the game — under interim coach Scott Gordon.

Sean Couturier scored his 30th goal of the season in the third on the power play to give the Flyers a flicker of hope for a comeback. But they had nothing left and Domi knocked in an empty-netter with 1:05 remaining to seal the win.