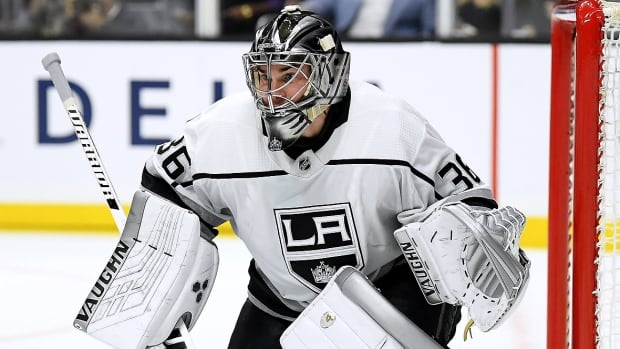 Los Angeles Kings goalie Jack Campbell will be out for at least a month after surgery to repair a meniscus tear in his knee.

The Kings recalled goalie Cal Petersen from their American Hockey League affiliate in Ontario on Monday.

Los Angeles is without its top two goalies after Campbell’s injury followed Jonathan Quick’s surgery last month to repair a meniscus tear in his own knee. Peter Budaj is the Kings’ likely starter until Quick returns.

Campbell will be out for four to six weeks after getting hurt in a 1-0 loss to Calgary last Saturday.

The 26-year-old former first-round draft pick has played well in his first extensive NHL experience this season, going 5-7-0 with a 2.33 goals-against average and .923 save percentage.

Quick has appeared in just four games this season for the Kings, going 0-3-1 with a 4.55 GAA. He missed five games with a lower body injury after playing in Los Angeles’ season opener, but has allowed 14 goals in three games since returning.

Quick is the winningest goalie in Kings history, a two-time Stanley Cup champion and the winner of the Conn Smythe Trophy as the NHL post-season MVP in 2012.

The former U.S. Olympian won the Jennings Trophy for the second time last season as the goalie for the NHL team with the fewest goals allowed.

The disappointing Kings are in last place in the Western Conference at 5-10-1 and have dropped two of three games under interim head coach Willie Desjardins, who took over from the fired John Stevens on Nov. 4.